Posted on September 13, 2020 by Catherine Sevenau

‘Betty was forever bringing home stray or wounded animals and hiding them under the porch’. 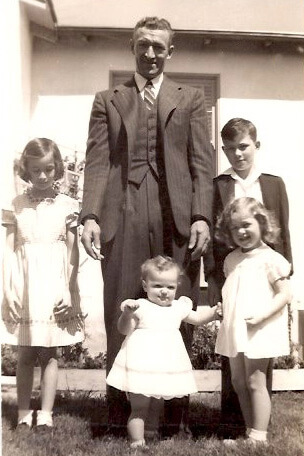 Chapter 5: Mid 1940s, Sonora. Larry and Carleen went everywhere together. They were a year apart (he was born in 1934, she in ’35) with the same dark brown hair and brown eyes. When he was four, Larry wore an eye patch, and in first grade, glasses. He had a lazy eye, the only thing ever lazy about that boy. He had his first job at the age of nine as a janitor for the Office of Price Administration. When he later had paper routes he was up at 5:00 a.m. to deliver the San Francisco Chronicle and the Examiner before school, then in the afternoon delivered a route for the Sonora Union Democrat.

Betty, the next sister, came along in December of 1939 while the family lived in Watsonville where Dad worked as an iceman. Claudia, the fourth child, was born in March of 1942.

When they moved to Sonora in 1943, Betty, to her delight, soon discovered Wood’s Creek which ran alongside the house. Making a pond from the leaking well out front, she created a sanctuary for the pollywogs and tiny fish she toted up from the creek. She was forever bringing home stray or wounded animals and hiding them under the porch. Our house was high off the ground and she kept her feral kittens hidden from Mom, spending months trying to tame them. Her only real pet was Blackie, one of the chickens. It had limber legs (a disorder where a chicken’s legs cannot support its own weight) as a chick, and Betty begged Mom to let her keep it so the other chickens wouldn’t peck it to death. Mom finally said okay. She figured it was going to die soon anyway. It didn’t. Betty raised Blackie and kept her safe in her own little box, petting her soft brown feathers, training her, giving her water and grain several times a day from her hand. She loved Blackie.

One day Betty woke up with a sore throat. Mom spent the afternoon cooking a big pot of chicken rice soup for supper, the rich aroma wafting from the kitchen.

Now dinnertime, Dad, at the head of the table, said grace, “Bless us Oh Lord…” At the sign of the cross, no one made eye contact; Larry sat stock still while Carleen squirmed in her chair. As everyone silently lifted their first spoonful, Betty suspected something was up and feared the worst.

Everybody froze. Mom and Dad carefully studied the rice in their bowls, soup spoons dangling halfway to their mouths, eyes lowered. Betty stiffened, shot a look at Mom, fell back from her chair and sprinted from the table, screaming, “Nooo!”

The family bolted down their supper; they were hungry.