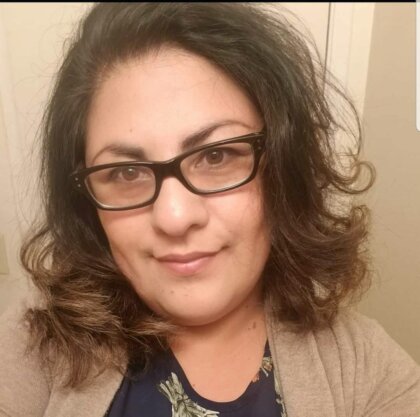 Maricarmen Reyes: I am an Outreach and Event Coordinator, in addition to being an enrollment counselor.

Covered California enrollments are coming up soon, right? They begin in mid-October. But because of so many people losing their jobs we have already been processing applications for them to switch from Covered CA to MediCal. During the pandemic, the average application has been taking three months. And MediCal offices were closed until mid-July. If a case is urgent, as enrollment counselors we can advocate for speedier processing.

How long have you been working at the Health Center? It will be five years in November.  Before that, I was an Education Coordinator/ Family Advocate at La Luz, so I was familiar with enrollment work.

You were recently appointed by Susan Gorin to the Springs Municipal Advisory Council  Yes, Supervisor Gorin invited me. I had developed a rapport with her and her office through inviting them over the years to our Health Fairs.

Why the Health Fair? We have a big community turnout always for the Fair, and I wanted all those people, , in addition to accessing and learning more about community resources,  to see and hear their elected officials. I wanted to be sure people understand the role these officials play in health care, in people’s health. And to help them be able to go to governmental agencies with trust, not fear. To ease their fear of going to where decisions are made. To know that they have the right to speak up. I want the community to find the power of their civic voice.

When did you first have this goal for your community? Since my work at Vineyard Workers Services I have known the local supervisors. I saw they are human beings, just like us. I learned I could express my voice to them and advocate for the Community. It was at this time that I got involved in health fairs and saw the importance of community civic engagement.

Tell me about your new role on the Springs MAC. It is tied to the years I served on the advisory committee of the Springs Community Alliance – with you. We brought to Susan Gorin the proposal for creating a Springs MAC. I am excited that we have a formal conduit to the county. My goal is for the MAC to become stable and lasting, and for the community to take advantage of this opportunity to start speaking up. I’m just a rep, but the people are the voice of the community.

Speaking of the community voice, you were a founding member of Nuestra Voz.  That’s right.  I worked with Alejandra, Gabriel, Victor Ferrer. We were a big part of the radio station programming, with adults, children, health professionals, many different voices. KSVY was founded as a bilingual station.

What was your first community work? With Migrant Education right after I graduated from Sonoma Valley High, I went to work at the high school summer school. I was part of the California Mini-Corps, for students who wanted to be teachers – we mainly worked with students from migrant and farmworker families. But I was at SSU during 9/11, a time of growing anti-immigrant sentiment, so I leaned more towards Community work. Yet, I still tutor and I am always a strong education advocate.

Where were you raised? I was born in Sonoma, and I grew up on Mulas dairy ranch, where my father worked in the milking barn.  Long days. He worked four days a week, from midnight to 7:30, then he was home till noon, and back in the barn until 7 or sometimes even 10 PM. I am grateful to the owners for providing a stable place to live and grow up, and especially to my parents for having made the sacrifice to migrate in search of a better life.

What was it like growing up on the ranch? I was the middle child, between two brothers. I remember the train going by. The engineers used to throw candy to us. Another thing I remember was around 1991 when I learned that there were men who had just come across the border who were living under the parked boxcars. They had grabbed a ride in boxcars like Depression-era hobos.

Where did you go to school?

I took the bus all through school, to Prestwood through fifth grade, then Altimira, then the high school. At Prestwood, I was re-classified – meaning that I was fully competent in English – in 3rd grade.  I took the GATE test. My third-grade teacher was definitely inspirational and pivotal in my education. In fifth grade, I was one of two representatives for our 5thgrade school spelling bee. I still have the word lists! At Altimira and Sonoma High I had to advocate for myself, having two parents who didn’t speak English. In the honors and AP classes at the high school there were usually only one or two other Latinos.

And after high school? I went to Sonoma State, and graduated in 2005 with a degree in Chicano and Latino Studies. When people would say to me, “what is  that degree?” I would say “because of what my degree is about, Latinos have the rights to education today.”

What job did you have?  I worked for the school district till 2008, as TA for the Newcomer Program and as a Substitute Teacher. There began to be so many deportations that there were fewer new migrant students in the program. I went to work for Vineyard Workers Services (VWS), which eventually got folded into La Luz. At VWS I learned about the Binational Health Fair, and that’s where I began working as a health and farmworker advocate. I got involved with the Mexican Consulate activities and High School Equivalency degree program for farmworker students. This is an SRJC program where I still currently tutor.

Tell me about that. I have been involved with the Promotoras de Salud (Promoters of Health) for twelve years.. I was going to go this year, until Covid, to a rural area in Mexico to help with health services.

You are part of many groups. How do you decide which ones to participate in? I am currently on the board of RISK (Resources, Information, Support and Knowledge), an organization that supports parents of children or teenagers needing help. I am passionate about this, especially after being part of the Sonoma Valley Youth Initiative in 2009, which looked at the issues facing youth in our Valley, following the gang murder in Maxwell Park. I am also the Secretary for Líderes Campesinas (Women Farmworker Leaders) – Sonoma Chapter.

Is there anything else you would like our readers to know? I would like to express my gratitude to each and every one of my teachers, mentors, colleagues and peers throughout my career and community work journey.