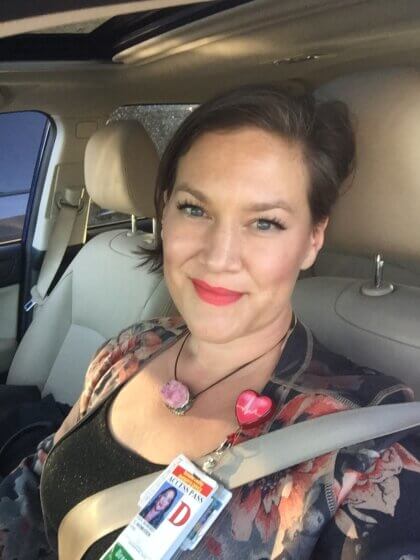 Marin County native and Sonoma resident Corin Rasmussen, the former Director of Nursing at the Sonoma County Adult Detention Facility in Santa Rosa, in conversation with The Sun’s Anna Pier.

How did you end up in Sonoma?

My mom had moved here. So when I was 27 and pregnant, I thought, “Here we come, grandma.” I started a home daycare and ran that for two years when my daughter was a baby.

Tell me about your path to a career in nursing.

It took me almost ten years. I had to start from scratch, do all the courses for an Associates degree from Santa Rosa JC. The nursing program at the JC is in high demand, and I had to wait for three years to get into it. While I was waiting I took Spanish and more English classes. I wanted to command the language with utter confidence.

And all this time you were working nearly full time, as a server, and caring for your daughter?

That’s right. Of course my mom was an enormous help. I worked nights, weekends, first at Harvest Moon, and then the last three years at Mama Tanino’s.

Once you were in the nursing program, could you space out your studies?

Not at all. You need to plow right through the two years, or don’t bother trying. You could only miss two lectures a semester. Kim at Mama Tanino’s was wonderful. She was flexible with me.

What was your first job in nursing?

A staff RN at the Sonoma County jail. When I graduated from nursing school I applied for a couple of jobs. I got one of them, but then I saw the ad on Indeed for an RN job at the jail. They called me for an interview and gave me a tour. I thought it was really fascinating. It was a window into a world that most of us don’t get to see, and I wanted to see it, and I wanted to help. Before I left the parking lot that day the Director of Nursing (DON) called me and told me I had the job as a staff nurse.

Why do you think you were drawn to the job?

In 2004 I had a terrifying experience with a police officer. There’s a bad everything out there, a bad MD, a bad cop, a bad teacher, a bad minister. I didn’t want to feel that way about a whole group of police officers based on that one experience. I took the job to heal.

I worked the day shift, “nocs” – the night shift, PMs. It was officially 32 hours but it always turned out to be 40 or even 50. It was a crazy demanding job. I had my first accident and totalled my car. And then of course the fires came. I once did a 24-hour shift during the fires.

What were your duties?

How much on-the-job training did you get?

I followed someone for six shifts, and then they turned me loose. The person who hired me left his job when I had been there for six months.

What were the objectives of the booking/intake job?

The main objective is to do medical intakes on all the people who come in. That means everyone who has been arrested, even if they don’t stay because they came for a citation, or they post bail. There’s a six-page form for the arrestee’s medical history, including medications, allergies, etc. I have had many interviews when the only answer the person would give was, “F— you.” But as the nurse in charge of a person; you can’t just “not know.” It’s terrifying. People have died in booking. There was one instance when the person had been huffing paint. The RN initiated CPR and with help from an assistant performed a perfect Code Blue, but the man died.

As many as thirty. The arresting officer drives into the vehicular sally port. If the arrestee is taking any medication or is intoxicated, they see the RN for a full intake. We get the most robust profile possible.

The funding from the County is very inadequate. At the end of my first year, I decided to take that Director of Nursing job. It’s hard, because you are risking your license when a place is understaffed and you are responsible. The medical staff is dealing with bare bones of staffing and equipment. They are tireless, creative, and compassionate, all of them, the RNs, LVNs, CNs and PAs.Those people were my sisters and brothers.  The medical and mental health staff there are absolutely the most salt of the earth, hard-working,  passionate about the practice people that you could ever hope for.

How about the deputies?

I saw arrestees in booking being treated with as much respect as possible. I’d say 90 percent of the deputies don’t opt for any violence if it can be avoided. The Sheriff’s Office does a wonderful job.

What were common issues among the prisoners?

Among the people who are in and out of jail, often they don’t do things to promote their own safety and health. Many have chronic conditions that are lethal. And there are so many suicide attempts.

What’s the capacity of the jail?

When I left my job this March, it was between 900 and 1,000 in the Main Adult Detention Facility. And there were 300 more at North County, the “honor farm,” for people who are not violent or psychotic. The census is way down since the pandemic.

Did you worry for your physical safety?

What’s next for you?

I’m going to try something else, a different experience, probably hospital nursing. To grow as nurses we need the full gamut of experiences.

One thought on “Under the Sun: Corin Rasmussen, former Director of Nursing, Sonoma County Jail”