With Nellie, the wrath was silent

Posted on November 4, 2020 by Catherine Sevenau

Chapter 8: Backstory, my maternal grandparents — Dec 26, 1894 • Fruita, Colorado ~ In a ceremony in her parents’ home, 21-year-old Nellie Chamberlin married Charles Henry Chatfield, a ranching man of 24. Nellie was a no-nonsense Catholic girl and exceedingly religious, but she also had a mind of her own and refused to consummate the marriage. In frustration, Charles took his new bride to the priest who married them, hoping for guidance. Father Carr sat Nellie down and gave her a talking to, instructing her to go home and perform her wifely duties. Nine months later my grandmother bore her first child—and over the next twenty years, delivered nine more. 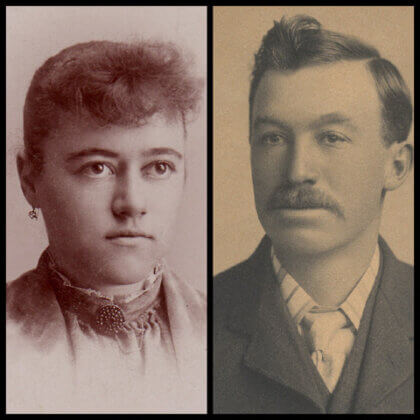 1907 • Sanders, Montana ~ Charles moved the family to Rosebud County, Montana, where for six years he managed a ranch near the hamlet of Sanders. In 1913 news came from family in California about the golden opportunities there: land was cheap, the weather was mild, and rice was the big new crop. Though Charles was a successful rancher, Nellie had tired of the cold and persuaded her husband to sell their holdings and join the relatives out west. Completing most of the preparations for the move, Charles rode into town to finalize their affairs. After being gone for four days, Nellie sent a ranch hand to find him. Not only was he found dead drunk, it turned out that he’d also gambled away all their money.

In a fit of venom while ironing her traveling skirt, she dropped the hot sad iron on her foot. With “all aboard!” and nine children in tow, she boarded the train in a wheelchair, leaving her husband behind. Nellie, now forty, carried her wrath. Charley, the oldest at seventeen, carried his silver timepiece and small leather-bound pocket diary. Leo, two years younger, carried his case knife. Howard, a scrappy fourteen-year-old, carried a chip on his shoulder. Roy, not quite eleven, stayed close to Nellie; he carted the food baskets and what was needed for the little ones. Her first girl, Nella May, a wisp of a child not yet ten, had both hands full hanging on to Verda who was four and tow-headed Arden who was two-and-a-half. Gordon, seven, toted his mother’s hatbox. On Nellie’s lap was tiny three-month-old Ina.