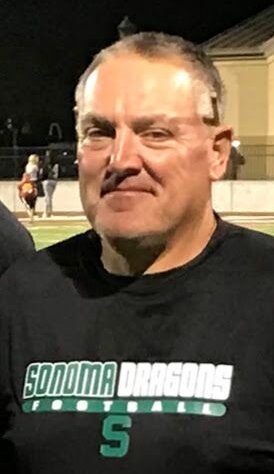 Bob was born in San Francisco on July 23, 1966, to Robert Sr. and Velma Midgley.  Bob was a proud Sonoman attending Prestwood, Altimira Jr. High, and Sonoma Valley High School (Class of 84’). He attended Chico State (Delta Psi Delta) and received a B.A. in Physical Education w/Teacher Preparation from Sonoma State University. Bob’s coaching and B.A. in Physical Education eventually led him back to SVHS where he taught P.E., coached football and spent time as the athletic director. On June 8, 1996, he married Stacey Ann Midgley [Walker]. They have two daughters, Kennedy and Kassedy.

Few who knew Bob know that he had a short yet successful modeling career. As a young boy, he won a cutest baby award before he was 1 year old in San Francisco and had his picture prominently placed in the Sacramento Bee for “boat safety” before the age of 3. He also appeared in an Oscar Mayer Weiner commercial. Growing up in Sonoma he spent after-school hours at the Boys and Girls Club (at the Community Center) where he won “Boy of the Month” in October, 1976. As a child he played youth soccer, Little League and Babe Ruth baseball, CYO basketball, and Pop Warner football. In high school Bob was on the wrestling and football teams earning multiple recognitions including the Redwood Empire Outstanding Athlete award for high school football. He continued playing football at SRJC and Sonoma State, with the honor of coaching at Sonoma State his senior year. His love of sports and compassion for youth led him easily to a career that allowed him the opportunity to share his passions and expertise with his family and the community that he loved.

Bob’s teaching and coaching activities for over 25 years in Sonoma touched the lives of all who knew him, but it was Sonoma’s youth who were blessed, as he equated sports, particularly football, with life. He molded and guided young men and women through his coaching and his Fighting Irish tattoo was a symbol of his determination. He was a teacher through and through and emphasized to his students to follow their dreams with passion, strength and stamina, igniting a spark of excellence in each and every one of them. Bob knew his career choice was going to make a difference to the people he had contact with and he encouraged his colleagues to follow his lead and give unconditionally while working with all their students; especially ones with special needs. He loved his profession and treated his colleagues like family.  You didn’t know Bob until you recognized the size of his heart. Bob was extremely thankful that he had the opportunities to coach his daughters and niece in softball and his nephew (Matthew) in football.  He found much joy as a coach and later as a spectator at the games and tournaments. His family says he was only unhappy when he lost a football game.

Due to the current pandemic, a Celebration of Life will happen at a later date. Visit CaringBridge.org for all updates and more information. Donations can be made directly to the Midgley family. The funds will be used for the girls’ education and a scholarship in Bob’s name. Donations can also be made to the Hospice By The Bay.

Our family wants to thank our friends, colleagues and the Sonoma community at large for your undeniable love and support during this time. Though death leaves a heartache no one can heal, love leaves a memory no one can steal. Bob has left us with so many memories that we will all cherish. Though cliche, the world was a much better place with him in it.