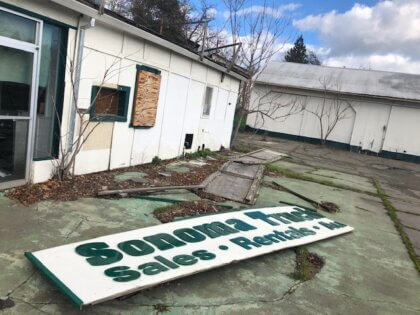 The housing development planned for the big lot at MacArthur and Broadway in Sonoma was ambitiously dubbed The Gateway, as it promised a striking welcome-point for people entering the city. But now, after the city council has acquiesced to a lawsuit halting the project, it will remain in sad disrepair. Long ago a car lot ( the tattered Sonoma Truck and Auto sign fell down recently) and now looking like an abandoned crack mini-mall, the prime acreage has inspired numerous development ideas over the years. A plan for housing was finally approved, but an appeal was filed over the environmental documentation. It’s complicated, but the city apparently decided the graffiti was on the wall – it couldn’t win, and settled the suit by revoking the permits. That includes picking up the plaintiff’s $82,000 tab for legal fees. The owner, super-frustrated, must start over.

Here’s what Amazon plans to do: turn the Victory Station Warehouse, on Highway 12 and Eighth Street East, into a delivery center and convert the adjoining 3.5-acre lot into a staging and parking area. The hub would be a 24-hour operation with 136 on-site employees and capacity for 190 delivery vehicles. Is that what the Founding Fathers of Zoning foresaw when designating that parcel “Limited Rural Industry”? County staff thinks so and, despite appeals to reconsider and the unanimous opposition of Sonoma Valley Citizens Advisory Commission,  recommends the project for final approval. 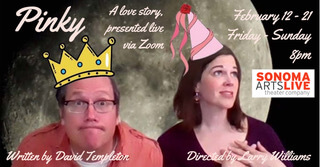 Sonoma Arts Live will mount its first piece of live theatre in over a year with Pinky, a play by David Templeton. The pandemic-era twist: the show will be streamed live, with a new evening performance each night, February 12-21. The tale of an oddball courtship stars husband-and-wife team Julianne and Mark Bradbury. It may be on the small screen, but the production, says director Larry Williams, is a big deal. “This new method of safe theater is challenging in so many ways,” he says. “There’s almost more work involved: more cues, visuals stepping in for set pieces, finding the necessary equipment, and experimenting with a completely new form of theater.” Offered by donation-only, at Sonomaartslive.org. 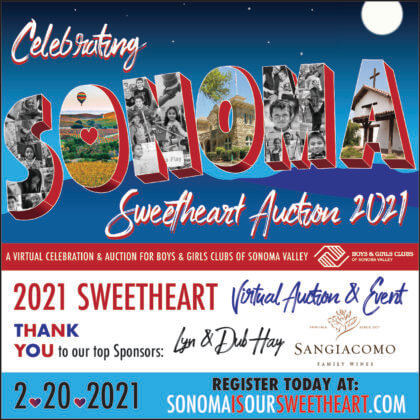 Of course for drama, intrigue and political soap opera-ery, there are always the live broadcasts of Sonoma City Council meetings. The current cliffhanger: who will be named to replace Rachel Hundley?… The newest member of the cast, Jack Ding, is enthusiastic about his new gig. He turned out for the Car Caravan and, while strongly advocating for a better healthcare system, was super happy to be out in the sunshine. “It was heartwarming to see friends and neighbors getting together again in front of city hall on such a beautiful sunny day. Our time apart made this reunion and opportunity to work together as a community all the brighter.”

For Springs John, the Super Bowl was a sad reminder of the 49ers a pre-pandemic year ago. “But that’s all box wine under the bridge now.”