Is there no end to you Chatfields?

Posted on March 8, 2021 by Catherine Sevenau

Chapter 12: Boucher Street, Chico, California ~ In 1915 my grandparents left Los Molinos and moved to the up-and-coming agricultural town of Chico, buying a two-story corner residence in the Chapmantown district, a working-class neighborhood near the Diamond Match Factory. In those days most people rented; few owned their own homes. With only two upstairs bedrooms–the boys sharing one, the girls the other–the house was small for such a large family, though the older boys were out on their own by this time. Downstairs, Grandma Nellie created a sleeping space for herself in an alcove under the stairway, keeping the downstairs bedroom for company. Grandpa slept in the shed. 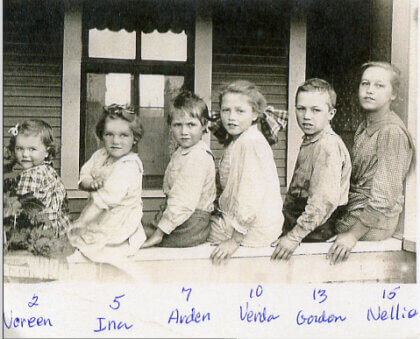 In her tiny alcove, Nellie hung a curtain for privacy, shielding her twin bed with a small dresser at its foot. Everyone was forbidden to go near her space. Under the bed she kept hidden a large flat coat-box with her burial clothes folded neatly inside: a gray shroud, a slip, a pair of white cotton underpants, a girdle, a new pair of shoes, and silk stockings. Grandma always thought she’d die young. Her children were aware of the box and respected their mother’s privacy. When Mom and the children came to Chico, Mom, to keep them in line, threatened that if they didn’t behave she’d make them look at Grandma’s shroud. On one of Mom’s visits, Nellie opened the funeral box and finding the stockings rotted, sent her to the store to replace them. Roy, still living at home with his mother when she passed away years later, had to replace them again.

The family bathed in the kitchen. The large, round, aluminum washtub hanging on the porch was filled with water from the kitchen pump handle and heated on the woodstove, then transferred a pot at a time to the tub. The older girls shared the bathwater, and then the small children, as many as could fit in the tub, bathed together. After their baths, the greywater was bailed out the back door into the garden. My grandmother washed her hair with rainwater collected in a barrel on the porch, a wood lid placed over it after a storm. She scolded her grandkids when they floated paper boats in it. It was soft water, unlike the hard well water. When she was younger, her dark hair was beautiful and went nearly to her waist. She wore it in a tight bun, only letting it down at night to brush it.

Sitting down to a meal with her children at the table, Grandma proudly noted that the Chatfield name would never die out, her having six fine sons. As it turned out, five of the boys never had children, and Howard, the only son who did, had all girls. With six of Nellie’s children and Howard’s five daughters (his oldest was five years younger than my mother Noreen) in the Chico school system, the local teacher looked over her spectacles while reading the roster at the beginning of the new school year and inquired in disbelief, “Is there no end to you Chatfields?”

Grandma Nellie Chatfield lived in this three-bedroom shingle and clapboard house for nearly 40 years. Holding firm reign, she raised her children here. Then, when she was done with living, she breathed her final breath in her now quiet corner dwelling on Boucher Street.