On the wild bird circuit 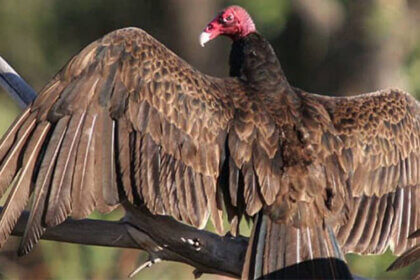 Ever since the largest trees in my neighborhood were cut down, including a Red Mahogany Eucalyptus topping out at one-hundred feet tall, habits of the wildlife in my yard have changed. Squirrels, for one, disappeared entirely for several months. There had been a crew of three or four digging holes, scavenging for nuts they’d buried but lost track of; they had a nest nearby in one of the trees that was removed. Today a rowdy group of youngsters have taken their place.

Now our California Black Walnut, at 70 feet high, is a neighborhood sentinel tree, and a roosting place to wild birds that previously found a home in taller trees no longer here. The other morning, I awoke just after dawn to find four California Turkey Vultures, commonly called buzzards, roosting above our house in the highest branches. I’m seeing a higher number of buzzards soaring in the updrafts than I recall seeing before and given the pandemic and the ways we think of vultures, it was actually rather disconcerting to find them sitting above me, silently waiting for sunrise, slowing stretching their wings in a heraldic posture after a cool night.

Vultures have long been mythological symbols of death and rebirth. Sensing the airborne molecules of animal decomposition while gliding in air currents, their awareness of death is profoundly acute; they are nature’s cleanup squad. A large flock of buzzards regularly roost in a group of tall Redwoods a few blocks south, but our Black Walnut now seems to be on their circuit.

The other big birds that have been stopping by lately are Red Tailed Hawks. Unlike the generally quiet buzzards, the hawks are screechers who make their presence known. Whether to notify rivals, declare territory, attract mates or put fear into smaller birds, their role as top predator is obvious. I watched one day as a blue jay found itself mortally clutched in hawk talons; taken to a branch, the dead blue jay had its chest feathers carefully plucked and its liver eaten before being unceremoniously discarded.

The only other large wild birds that call our yard home are crows, and to call them wild might be a stretch. Crows, too, are noisy birds, even noisier than hawks. Crows make all sorts of vocal sounds, from the typical “caw” we imitate to gurgles, mumbles, cackles, and noises that often sound like a clumsy attempt at words. I’ve watched crows drop black walnuts onto the street to get crushed by passing autos; I have no doubt they know all the best spots. In this sense, for crows, humanity and its artifacts are simply phenomenon of nature to be used as tools. I like that about crows.

The other birds that come around are little. Towhees, robins, mockingbirds, woodpeckers, wrens, and the like, plus hummingbirds. I was pleased to discover how curious hummingbirds are about me; I enjoy the attention. Their wings whirring at over 50 beats per second, they hover two or three feet away and check me out from several angles just in case I am a source of nectar; they then speed away to stick their tongues all the way down a tubular succulent flower.

A family of foxes took up residence last year under my garden shed. Possums use my rear fence to cut across the neighborhood. Our rural valley houses all sorts of wildlife. I like it.