Half full, half empty… is there a third option?

What to make of the Sonoma Valley High School’s in-person attendance situation, where about 50 percent of students came back to campus and the other 50 percent is sticking with an all-zoom virtual school day. Today’s topic for metaphysics: Is the class half full or half empty?… Over at Admin, turmoil. Two vice principals, Shawna Hettrich and Francisco Manriquez, suddenly announced their resignations, effective at the end of this semester. Also leaving in June: the school’s only dedicated agriculture teacher, Jessica Hamilton. 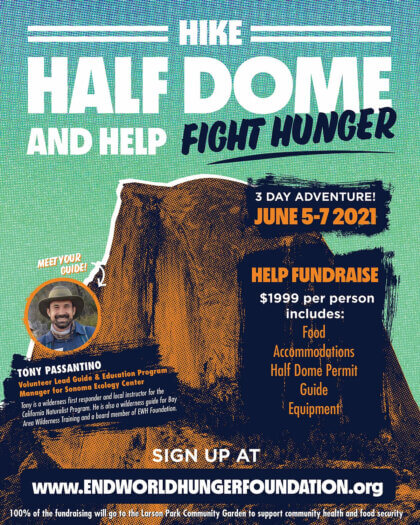 Sonoma Ecology Center educator and ace wilderness guide Tony Passantino is leading a fundraising trip to Yosemite’s Half Dome in June, a trek that includes all expertise, accommodations and food, permits and gear. The goal: “provide $10,000 in support to the Larson Park community garden project.” Endworldhungerfoundation.org… But about that dome. Is it half gone, or half there?

The Rotary-Catalyst Fund committee just awarded the last of its $200,000 to small businesses in Sonoma Valley. In all, about 250 recipients received no-strings grants of $500 to $1,000, and sometimes a bit more, to help the businesses mitigate financial effects from Covid restrictions. “Businesses in the Valley aren’t out of the financial woods, yet,” said Dub Hay, the committee co-chair. “But they let us know that the grants gave them some hope, and the knowledge that our community supports them and their efforts to survive this pandemic.” Full disclosure and maximum gratitude: The Sun was one such recipient. Thanks again!

Stephanie Hiller saw that during President Biden’s speech to Congress, behind him stood two masked women in suits, Vice President Kamala Harris and Speaker of the House Nancy Pelosi. Biden bragged that this was the first time in history that the president had two women behind him, an occasion he said was “long overdue.” The remark was met with wild cheers, Hiller noted, “but the position of one woman, or two or four, behind a man does not seem so revolutionary to me; I’ll get excited when the woman is in front.”

Bad influence. Katie Sorensen, of Sonoma, a relentless self-promoter and social media influencer, always wanted to be internet famous. Here’s how that’s going: after posting a racist-tinged rant baselessly accusing a Latino couple of attempting to kidnap her two kids in a Petaluma craft store, Katie “Karen” Sorenson has been charged by the D.A. for two counts of giving false info to police. An extreme way to get your click numbers up. 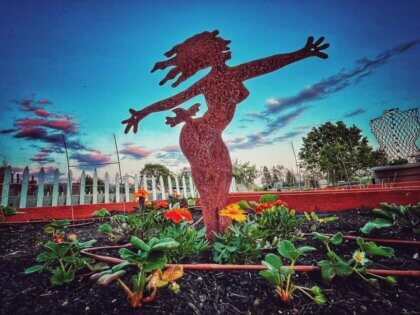 For her entry into the City of Sonoma’s Earth Day photo contest, Diane Askew took this photo at the city-owned Sonoma Garden Park. When she inquired why her entry was not posted with all the others on the city website, she received this reply from City Hall: “Following review of your submission, it was determined that it would not be posted to the City’s website due to the depiction of nudity.”

Back by and on demand is Sonoma Arts Live with Elliot & Me, a musical comedy available to stream at Sonomaartslive.org. The musical is by hitmaker Elliot Willensky (who wrote for Michael Jackson and Whitney Houston, to name drop a few) with the book, based on their own relationship, by his brother Steven. When Steven pitched the idea to SAL Artistic Director Jaime Love, she “thought this true, funny, heartfelt musical would be just the antidote for theater-hungry patrons in Sonoma. I am so thrilled to be collaborating with her”… Never put putting on a show past the theater kids, even during Covid. After all, necessity is the stage-mother of invention.

One good thing about getting older, as a golfer at least, is that you have a better chance of shooting your age. Nick Blonder, long time Sonoma Men’s Golf Association member and past president, managed that feat, carding a 70 at Indian Valley in late April. That score is amazing at any age. He’s 71.

A rare moment of public graciousness at Peet’s, where two men arrived simultaneously. One offered the other the first place in line. The other was a bit dumbfounded by the magnanimity and took a beat too long to respond. “Sorry, I was confused by your good manners, I’m not used to that,” he managed. “I know,” responded the other. “I’m not from around here.”