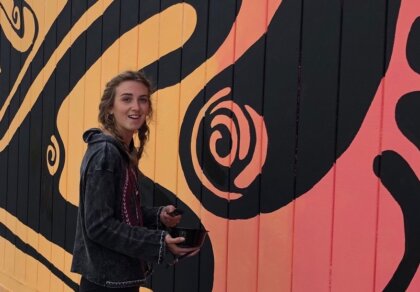 A bright, bold design now expressed as two huge outdoor murals started out, admits the artist Elsa Winter, as a doodle. A small drawing speaking to big themes, one that would ultimately be “supersized” by a crew of student volunteers.

“I’ve always been really inspired by the concept of duality and the complex relationship between light and dark,” says Elsa Winter, a senior at Sonoma Valley High School, “the dynamics between the sun and moon.” So when student A.J. Riebli of the Campus Beautification Club suggested a sun/moon concept, Elsa jumped on the idea.

Plus, making it 40 feet wide would be pretty cool, too.

As she sketched, the idea of creating a mural on the campus, a legacy project for her fellow seniors, took shape. Word reached Peter Hansen, the school’s Campus Beautification Club Supervisor, who asked her to spearhead a mural project to transform an area in and around two buildings.

“Working with the Beautification Club, I learned about how much work they’ve been putting into improving the school, and it was really amazing to share a common goal of wanting to welcome students back to campus in a way that really involved the kids themselves.”

She was quickly caught up in the club members’ enthusiasm, “how excited they were about making the campus a more welcoming, inclusive space. That the mural would brighten a lot of people’s days, in even the slightest way, was my main motivating factor.”

On to the job itself, where Winter would project the design onto the structure wall and trace the pattern. She’d do that by night, and it was cold, crampy work. “I’m lucky to say the biggest logistical roadblock was unfreezing my hands.”

Then came the painting. Again, hard work but wonderful camaraderie.

“A bunch of my friends helped me paint and I’m so lucky and thankful,” she said, “Having seniors involved was a really important piece of the process because I wanted people to feel involved, and that they got to leave a lasting mark on the campus.”

“I feel so grateful to have had so much support throughout the process, and hope that I can show other people that if they have an idea and really want to make it happen, it is 100 percent possible and worth the hard work. 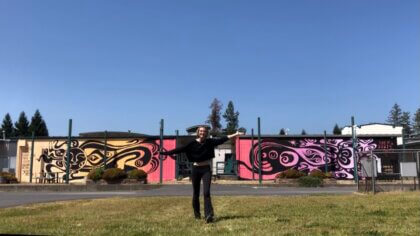