When you hear the term “dude ranch” you might envision cowboys leading trail rides in the Rocky Mountains, or easterners in fancy garb sitting around a campfire in a Southwestern desert. Sonoma County doesn’t usually come to mind, but it should – there were dude ranches around these parts back in the 1930s and ‘40s.

Dude ranching began in North Dakota in the 1880s, and after World War I ranches had opened up from Wyoming to Arizona. When you went to a dude ranch you knew you would get a very specific type of vacation, centered around cowboy life: you would ride horses and even help herd cattle if you wanted, sleep in rooms designed to look like cabins or bunkhouses, even eat outdoors from a chuck wagon. People from back East craved this Western experience. 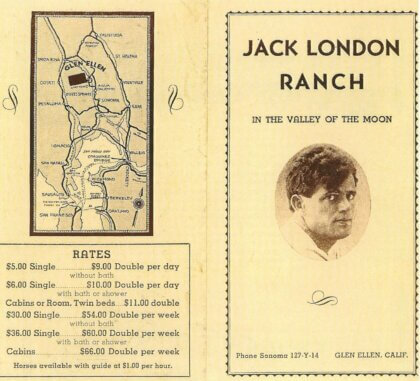 Sonoma wasn’t the Wild West but it had legitimate cowboy roots. For example, the Millerick brothers, famed for their bull riding and trick riding skills, held a rodeo at their ranch starting around 1929 and it went on for decades. The Larson Family Winery is on that land today. Opening dude ranches around here made perfect sense.

The first Sonoma County dude ranch started up in Glen Ellen in 1934. In that year Charmian London and Eliza Shepherd, the widow and sister of late writer Jack London, turned their famed Beauty Ranch into the Jack London Guest Ranch. They built a few cabins for visitors, and for $9 a day a couple could stay in one of these rustic rooms ($10 if you wanted a bath). The ranch’s horses were available for trail rides, but guests could also bring their own. Charmian London told the San Francisco Examiner that she opened the guest ranch because “…of the increasing desire of readers of London to visit the picturesque valley which he immortalized with his pen.”

She hosted social and political groups at the dude ranch too, and her cowboys and workers provided the entertainment. The ranch ceased operation sometime in the 1940s but was possibly still welcoming a few scattered guests into the 1950s.

In 1935 a man named James J.O’Brien bought 600 acres of the old Crocker family property in Cloverdale and opened the Covered Wagon Dude Ranch. He decorated it inside and out to look properly Western, and hired a real cowboy named Slim Dunlap to wrangle the horses and the dudes. The bar was built to look like the inside of a covered wagon.

To everyone’s surprise, James put the dude ranch up for sale in November of 1936. When a Los Angeles man bought the place as a country home in February of 1937, the O’Briens left town. Two years later they made headlines all over California: not only were James and Anita not married, she was still married to someone else. They had gone overseas on forged passports, though they split up once they got back. The government eventually caught up with them and they were arrested for the passport fraud.

It turned out James O’Brien was not a Canadian millionaire as he had claimed, and left unpaid bills when he departed Sonoma County. He ultimately spent six months in the slammer in San Francisco. Then he and Anita disappeared from history. (So did dude wrangler Slim Dunlap.)

Throughout the 1930s and 1940s stores in Santa Rosa carried clothing which had become popular in movies with dude ranching themes, especially those featuring singing cowboy Gene Autry. Dibble’s for example, sold “Dude Ranch Shirts,” which were probably made of shiny sateen with piping in contrasting colors. Montgomery Ward had “Dude Ranch slack suits” on its shelves, and these came in either plaid or denim.

Bill Flynn, owner of the Londonside resort in Glen Ellen, bought the old Trinity Ranch in 1944 and turned it into the Top o’ World dude ranch. He didn’t get the number of dudes he needed to keep the place in business, though. In 1949 he put Top o’ World up for sale while he ran the dining room as a public restaurant. In the 1960s the property was a popular club which offered horseback riding and swimming.

By the end of the 1940s dude ranching had disappeared from Sonoma County, but the concept of the dude ranch was still popular. Real estate ads enticed potential buyers by claiming that properties were ideal for dude ranches. An ad in the February 6, 1949 edition of the Press Democrat offered 380 acres for sale a few minutes from the center of Santa Rosa. Also included were a ranch-style home and cottages, set in the midst of riding trails. The ad concluded with, “This would make an ideal dude ranch.”

Sonoma County was never a center of dude ranching in California. But we have legitimate Western credentials. And during the 1930s and 1940s, the men and women who wanted to try dude ranching found just what they needed, right here.

Lynn Downey is a historian, consulting archivist, and Sonoma resident. She is the author of A Short History of Sonoma, and the award-winning Arequipa Sanatorium: Life in California’s Lung Resort for Women. Her novel Dudes Rush In was published last year, and her next book, about the cultural history of dude ranching, will come out in 2022. www.lynndowney.com.

One thought on “Dude ranching… in Sonoma County?”