In 2018, Sonoma Valley Museum of Art, with sponsorship from the City of Sonoma, launched a unique and popular exhibition of sculptures in the Plaza. The pieces became a destination experience for visitors and locals, and people still talk about the bronze deer family.

The outdoor art program has returned, with works by four well-known sculptors through October. Volumes could be written about their individual inspiration and process, but for now here are some insights from the sculptors themselves.

Beasley became enamored with sculpture in 1961. After studying at Dartmouth and Berkeley, where he received his BA in 1962, he bought an abandoned brick building in West Oakland and turned it into a studio. Over the years his space requirements have grown exponentially; he now operates four warehouse buildings. His sculptures in the Plaza, Refuge of the Moon,  numbers I and IV, are made of granite, but he says he is more widely known for his  metalwork. He’s interested in all kinds of materials, though, as long as the shapes appeal to him. A solo exhibition of his large collages and sculptures is in the works for this summer in Sonoma. This month, he is sending six truckloads of work, 60 pieces in all, for a 60-year retrospective in Hamilton, NJ. His works are in the collections of museums across the country and in Europe.

Daley is elated to be part of the sculpture exhibition in the Plaza. She’s also excited that SVMA adds extra vitality to art exhibitions by making them accessible to the public. Daley is interdisciplinary. She’s equally comfortable working with sculpture, photography, or paintings. “My work is a metaphorical commentary about the  delicate balance of nature, and references materials that capture light,” she says. “I am inspired by the environment, by people and by concepts,  and from these sources of inspiration my artworks usually come to me in  fragmented dreams.” One of her sculptures is Aurora III, part of a series of three. She successfully constructed aluminum and stainless-steel powder- coated materials with 268 Plexiglas rods, measuring 8 feet high. Daley says it’s tricky to transport them and trickier still to get it all together, but she was up for the challenge. 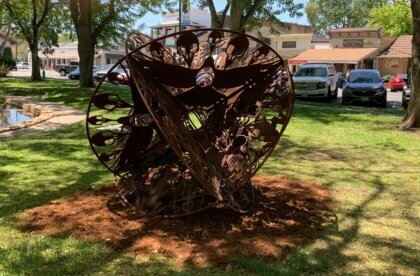 Hassen was part of the “Undiscovered” exhibition at SVMA in 2012 and enthusiastically supports the vision of the museum. In 2017 he participated in SVMA’s “From Fire, Love Rises: Stories Shared from the Artist Community” with a mixed-media work incorporating fence railings that had survived the firestorms. Of that experience, he said, “Art is responsive to society and to history. There is always a backstory.” Three of his monumental steel sculptures are part of the exhibition in the Plaza: Cycles 1: Religion, intertwined disks suggest that Judaism, Islam and Christianity can exist in harmony; Cycles 2: representing the incremental progress made by science over the eons; and Cycles 3: Extinction. 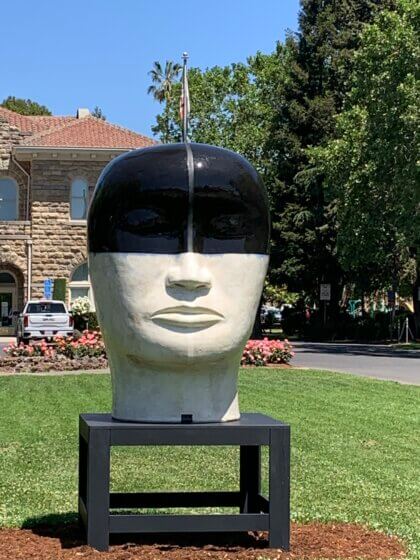 Kaneko spent his youth in Japan, and after arriving in California in 1963, the rest of his life in America. He is conscious of both cultural influences in his daily life but appreciates the freedom he has in the United States. His studio in Omaha, Nebraska encompasses three buildings to allow for the huge expanse he needs for his work. His two exhibits in the Plaza are hand built  and glazed ceramic “Dango” heads which embody an air of peace. Kaneko believes there are lots of possibilities to the problem of abstract form and the head. It interests him to shrink the distance between viewer and object by using a realistic form. He began making heads in pairs to show the important element of their spacing, which he says could be any measurement; the adjustment of space between them is part of the piece. The result is one head with a neutral expression paired with one featureless version, creating visual tension.

Jackie Lee is a supporter of the visual arts in Sonoma, with a focus on individual events and  artists as well as those represented by established galleries. [email protected]

One thought on “Sonoma Plaza as outdoor sculpture garden ”