From paradise to parking lot

Posted on August 3, 2021 by Catherine Sevenau

My paternal grandparents were tall, sturdy, farming stock. Grandma had a reputation as a relentless taskmaster and was always thinking of something for her husband to do. He could never sit down, even in the middle of the winter. It would be late evening and she’d chase him out to clean the chicken coop. She then chased the boys out to help, but the boys hid behind the cows where it was warm and read western comics. You didn’t dare waste a minute until you went to bed. But Grandpa was easygoing and got along with everybody, including Grandma. Neither ever raised their voice. 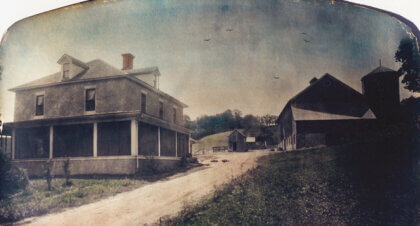 Washdays were Monday mornings. In the washroom next to the barn, Grandma and the girls boiled clothes, sheets, and towels over the big stove, scrubbed them on the metal washboard, then hung them on lines to dry. During the winter everything on the lines froze so the girls stacked the laundry like cardboard cutouts to carry in and hung them in the giant attic to dry. A hundred odd-shaped earthenware jugs filled one attic corner, trunks lined the dusty walls, and Grandpa’s old harpsichord rested in the rear. In the early 1930s, when Agnes and Anna were spring-cleaning, they threw everything out the attic window into the garden, built a bonfire and burned it all: books, photographs, gilded mirrors, framed portraits, the harpsichord, the Victrola, rocking chairs, old cards, letters, and love notes. They considered it junk.

In 1937, at the age of 64, Grandma passed away. Ten years later, in March of 1947, at 73, about the age when most farmers wore out, Grandpa passed. He’d been suffering for some time, and died after having surgery for lip and throat cancer from smoking cigars and pipes all his life.

Grandpa left no will and his estate wasn’t settled easily or harmoniously. Quite a fight ensued as to what was going to happen to the farm. Hands were raised against one another, along with screaming and cussing; it didn’t matter that it was Sunday.

Elizabeth slapped Amelia, or was it Amelia who slapped Elizabeth? Elizabeth took care of Grandpa’s finances and the sisters were in great disagreement. Bill Hauser spoke up. Shaking his head, he said Ma and Pa would not want to witness this. When he announced he and Agnes didn’t want anything, things settled down. Carl (my father), who’d come from California for the funeral, suggested to his siblings that Bill and Agnes get an acre of land for taking care of Grandpa and Grandma. Joe, along with Amelia and Pat Conway, purchased a portion of the land, Elizabeth already owned an acre, Agnes and Bill Hauser were gifted an acre, the golf club purchased four acres, and Vincent Lilly purchased five acres and all the buildings.

Mr. Lilly was a cattle buyer, living on the farm from 1947 until his death in the 1980s. His estate was not settled for some time, and like all empty buildings not kept up and cared for, it fell into ruin.

The whole section was overgrown and the house was constantly vandalized. Kids broke in and had a bonfire in the kitchen. When the Lilly estate was settled in the 1990s, the Stuart Corporation purchased the land from Lilly’s estate for $6,490,000, leveled the buildings, and built a three-story, 108-unit apartment complex. A fire station was built on one section and on another they paved paradise and put up a parking lot.