Submission Guidelines
The Sun welcomes your work. Find out how to submit to Deb Carlen, Creative Arts editor 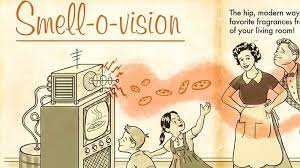 It was the early 1960s , and “Smell-O-Vision” made its debut at our local theater. Coming on the tail of the 3D movie craze, it was an in-theater system that released pre-programmed odors during key scenes of a movie—so the viewer could literally smell the story.

Gun barrel-sized metal tubes were mounted at the back of each theater seat, with a small hole at the tip. At pivotal moments in the film, the barrel in front of you would softly hiss, emitting an aroma for that particular scene: a bouquet of roses, a cigarette, a woman’s perfume, a sizzling steak, or gun smoke after a wild shootout. We’d read in the paper that audiences would soon come to anticipate each new aroma as the story unfolded, with whispered amazement at the realism and immersion of the new medium.

I went with my parents on opening night. Because we were running late, we hadn’t had time for dinner. My father said that we could all grab something afterward, but I told him I couldn’t wait. So he bought me a warmed-over hot dog and chili fries from the theater snack counter. I wolfed it down in the neon-trimmed lobby, and we made our way into the packed house, ready   to go.

But it soon became apparent that things weren’t sitting well. My intestines began to churn, like there was something alive in there. It was all I could do to hold things in. I was getting increasingly desperate, but there was finally a particularly noisy scene in the film—with clattering city traffic and honking car horns.

Sensing my opportunity, I leaned up to one side, slowly letting it out. I figured that if anyone heard, they might just think it had been the Smell-O-Vision barrel in front of them. Mission accomplished.

But just then, the movie cut to an indoor hotel scene, with a group of unkempt, gangster-looking men in undershirts, drinking, scratching their hairy chests, plotting a revenge hit. What I’d just done slowly wafted out into the theater. People nearby began shifting in their seats, heatedly whispering to one another.

“Oh, man!” I heard someone exclaim.

Expressions of disbelief soon turned to revulsion and horror. A woman nearby held a lace handkerchief up to her face. “Well, I never!” she said to her husband.

“Really..they’re actually doing that?!” said another man. People began fanning their Smell-O-Vision brochures in front of their faces. I pinched myself, trying hard not to laugh.

When the film was over, I heard a man in the lobby complaining to the theater manager. “Smells like that…in a movie! Are you serious? That was totally uncool, man!”

“Was that you?” my father whispered as we headed out the lobby door, a look of fiendish delight on his face. I nodded sheepishly, and he discreetly high-fived me.

Smell-O-Vision only lasted a year or two afterward, soon dying an early death. But I’ve often wondered whether I helped bring it down.