The hub of the wheel 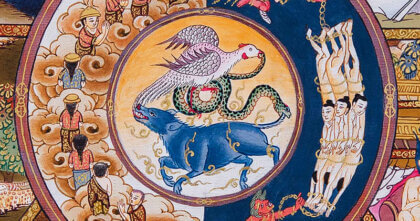 Consider the human condition in all its glory: creative, depressing, loving, deceitful, generous, lawless, kind, hateful, gregarious, afraid, compassionate, and cruel. What a chaotic and confusing mix of elements we are.

No matter the era, political system, geographic location, economic status or ethnicity, the swell of humanity rises and falls, crashing onto the shores of history. From the greatest of empires to the smallest of tribes – right down to the dynamics within a single family – the human condition encompasses our best and worst.

Latching on to the hope of progress, that in some way we will be able to escape the pitfalls that have hobbled our past, humanity nonetheless can’t seem to avoid shooting itself in the foot. Hope persists, but people employ it differently; some pin their hopes on a better future while others pin them on a cherished past. In either case, such hope is an expression of helplessness in the face of uncertainty.

A variety of cultural forms explicate the human dilemma – religious, philosophical, artistic, and psychological. Monotheistic religions tend towards blame and shame, pinning our condition on original sin; pantheistic faiths point towards supernatural forces or the unavoidable effects of our past lives. Philosophical views on the human condition range through a descent from perfection to an inherently chaotic nature of the universe. Artistic expression seeks to pierce human mystery through play using sound, color, costume, and contrivance. Psychological explanations find cause in trauma, developmental phases, organic dysfunction, and neurosis. None of these have or can fully solve our problem.

The problem, as Shakespeare explained, “is in our stars, in that we are underlings.” I take that phrase to mean that the human dilemma is built into us, foundational. We cannot escape our problems because they are us, they are an expression of our animal nature.

Rational minds that appear to have evolved beyond our animal nature deceive us; we mistakenly believe our own bullshit. Although we’re terribly clever and have figured out all sorts of complicated things, our animal nature endures. Greed, aggression, and ignorance continue to fuel our actions and behavior and remind us that we’re just a step ahead of wild beasts. Our cultural fascination with thievery, murder and deception is the outward expression of our inner torment.

In visual depictions of the Buddhist Wheel of Karma three creatures are shown in the wheel’s hub: a rooster, a snake and a pig. Together they represent the greed, aggression and ignorance of our animal nature. Six possible realms of existence surround the hub ranging from heavenly to hellish. The hub is connected to all six possibilities, an insight into how our animal nature is at the center of human condition and cannot be escaped.

Attempts to convince ourselves that we’ve transcended our nature always fail in the long run. Civilization after civilization considered itself to the be the highest and best, and all of them, in the end, succumbed to collapse. We devotedly climb high ladders of belief, but repeatedly ignore the truth of the ground upon which such ladders rest. We blame fate, enemies, and the vagaries of chance for humanity’s problems, but fear looking honestly at ourselves.

The Greek root of the word Apocalypse means “parting of the veil,” in other words revealing the nature of who and how we are. Greed, aggression, and ignorance continuously fail us; our only refuge is compassion.