Skip to content
Under the Sun: Interviews ~ Anna Pier

Under the Sun: Kina Chavez, restaurateur 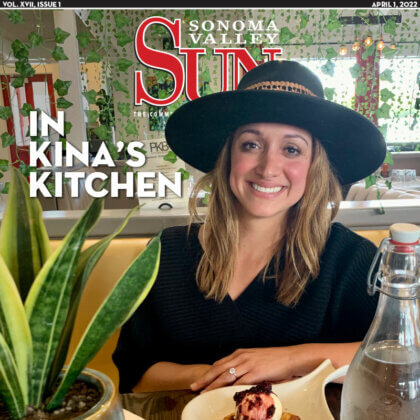 Kina Chavez has launched a new venture, Kina’s Kitchen. The Sun’s Anna Pier sat down with her to talk about the change, her family influences and growing up in Sonoma.

This new venture is in the place you’ve been for three years. That’s right. April 1, 2019 my husband Sal and I opened Picazo Kitchen and Bar on Highway 12. That timing did not give us a chance to thrive. Power outages, wildfires and then the pandemic – it’s all a blur. My in-laws Kris and Salvador Chávez had opened Picazo Café on Arnold in 2009, named with my mother-in-law’s maiden name. I started managing it in 2017, and the Picazo Food Truck. So Sal and I began by naming this place “Picazo,” too. The Café has its own identity – the best hamburger in the Valley, great casual food. As we came out of that very difficult time, we realized this place needed its own identity. The struggles of the past couple of years have enabled me to get a fresh start.

So you are rebranding. Yes. I felt shy about calling it Kina’s Kitchen, but everyone told me to use my name. My name is Karina, but when I was little I couldn’t roll my “Rs” so I said my name was “Kina” and it stuck. 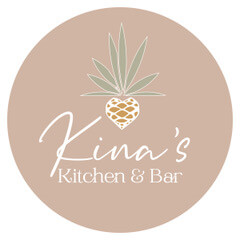 What’s the concept for the new restaurant? Well, when I can, I go on sales trips with my husband Sal, for his mezcal company. I love to go to L.A., to trendy restaurants. I realized Sonoma could use a trendy place. Mexican food with a twist. And American food, like Nashville fried chicken. And a bar focused on lots of different mezcals and tequilas. Great craft cocktails. And specials for the community, like Senior Day on Wednesdays with 20% off.

What role do you have in the kitchen? I’m pretty involved, hands-on, working with our wonderful chef José Ruiz. Lots of the recipes are my mother’s, tweaked by me. For instance, I add bone broth to her green pozole, and make it with chicken instead of pork. We try to use organic foods as much as possible. I’m a mother, and we eat organic at home, I know how important it is. 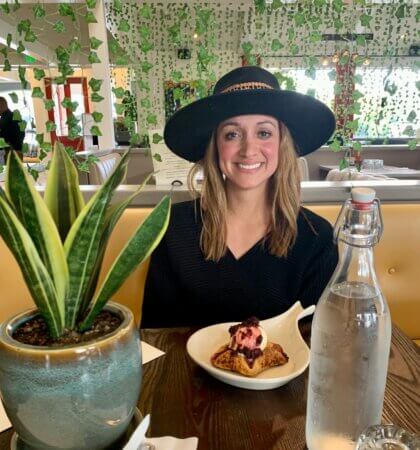 Have you always been interested in food? Both my parents have worked all their lives in food. My mother María Márquez has been the chef at Juanita Juanita since 1993, working with the owner Kathy Bruno.  I worked there serving in high school and junior college. I’m one of four girls, and we all worked there. But I’m the only one who enjoys cooking. My father has been baking for Homegrown Bagels all my life. And when I was a child, he raised rabbits, chickens, ducks, goats. I had to help with the butchering. The family dinner was always important for us, even when my mother’s work kept her away. At home my father grew corn, squash, tomatoes, cucumbers.

What were you like as a youngster? I was the third daughter, and I was always the tomboy, always adventurous, always out in nature. Climbing trees. I liked to hang out with the boys. Girls bored me. And I always wanted to have a dog day care. I love dogs. We have two boxers now. They are wonderful with the children.

Tell me about your children. Maximus is five and Salvador (III) is seven. It was really important to us for them to be bilingual, so they go to Flowery School. At home, we speak a mix of English and Spanish. But with their grandparents, it’s all Spanish. I really wanted them to know my native language. My mother brought me to the U.S., to East L.A., when I was two. Lucky for us, she came on a visa through her sister, so we didn’t have a difficult time as immigrants.  We moved to Sonoma when I was four.

You and your husband Sal were sweethearts at Sonoma High?  We actually first connected when we danced at the Grad Night party. We had always known each other, I knew the people he dated. My father was traditional, very strict, he didn’t think his daughters should date until they could marry. And he wanted us all to finish college, and we did. Sal was the first boyfriend I brought home to meet him. We married in 2010.

Anything you would like to tell our readers? I feel so blessed, I have had so much help. I have the best staff you could imagine, we call ourselves a team. I really appreciate this community. And Bob Rice, who had the Breakaway here, is a friend and mentor to me. Growing up in Sonoma and having a business here warms my heart. When I see people I grew up with, having kids, coming into the restaurant, I see the circle of life in action. 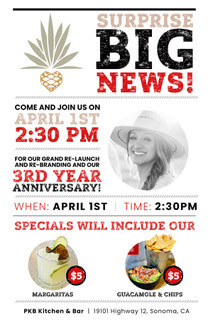 3 thoughts on “Under the Sun: Kina Chavez, restaurateur”