If you paint it, will they come? 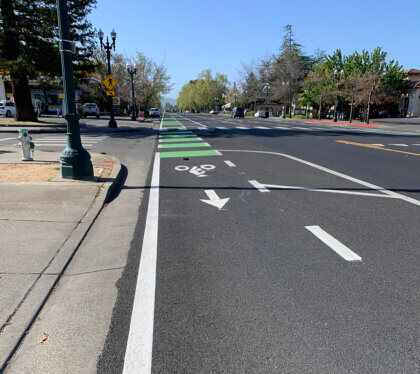 Anyone who knows me knows that I’m an avid walker. I cross Broadway every day, sometimes several times as I go about my errands and appointments. Being a pedestrian crossing Broadway is not a casual event; I make eye contact with drivers to make sure they’re going to stop before I cross. Now, I’m on the lookout for bicyclists.

The new bike lanes on Broadway are completed. Wow, what a paint job it is! I can’t count the number of times I’ve been asked about the meaning of the green squares. I’ve been tempted to say it derives from The Legend of Gawain and the Green Knight, but answered honestly that it’s to provide extra safety markings when a bike lane crosses the intersection. I think opening a Bike Lane Orientation Center at the old Truck and Auto site at MacArthur and Broadway might be helpful.

So far I’ve yet to see anyone riding a bike down Broadway in the new bike lanes. There was substantial support for the lanes from members of the biking community, but I can’t say that their support has been translated into pedaling, at least not yet.

The Broadway bike lane project may be a case of the “if you paint it, they will come” school of planning. Time will tell. For now, the new bike lanes are the perfect size for electrified tricycles; I’ve witnessed happy tourists zipping along in single file towards the Plaza. I’m not sure how bicyclists feel about electrified carts in the bike lane.

I do see people on bikes in town, and I’m not just talking about half-marathons for bicyclists. Second Street and Patten Street on the East Side appear popular, as does Denmark Street. What these streets have in common is very little auto traffic. If I still rode a bike, and those days are long gone, I’d be riding on streets with as little car traffic as possible and avoiding Broadway except to cross it.

I will concede that the new paint job is a fine piece of civic street art. An art class on perspective would be well-served by Broadway, as its white and yellow parallel lines with splashes of green appear to converge at the distant horizon. In reality, of course, that’s just an illusion; the bike lanes abruptly terminate at both ends, abandoning bicyclists to the mercy of distracted drivers in speedy cars.

City planners sometimes use the “if you build it, they will come” theory, and occasionally succeed. Brasilia comes to mind, the futuristic, carved-from-the-jungle capital of Brazil designed in 1956 and now a major metropolis. Brasilia barely survived a dystopian population explosion, for indeed, they did come. Unless Sonoma makes some major provision for bicycle circulation in and around the Plaza, and if the bicyclists do arrive, we could have our very own dystopian traffic mess on our hands.

Speaking of messes, have you noticed how dirty and discolored portions of the new striping have become? Apparently the thermoplastic material used for crosswalks, etc. quickly soils despite being fully cured by a blowtorch. Due to contact with tires, some previously bright white portions now appear muted gray, and are getting darker by the week. I’m tempted to haul out a sponge mop and cleanser, but afraid I’ll get run over.