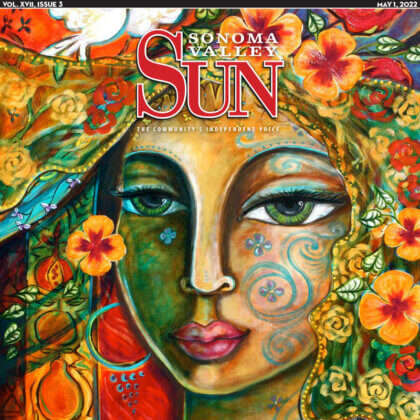 Inside the new art space on Sonoma Plaza —

A Sonoma Plaza storefront on First Street East, Musette is a new gallery, workshop, film studio, and event venue created by Sonoma artists Shiloh Sophia and Jonathan McCloud. In love, work and life, they have created together side by side for ten years.

Musette will be a space for local and global art exhibits, art classes, calls for art, unique gifts, and much more. 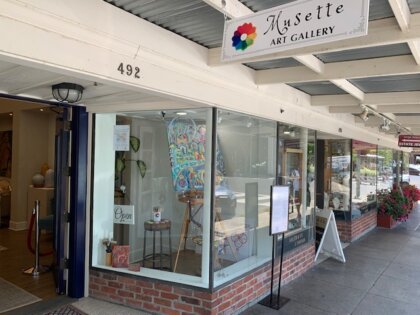 “The name Musette is inspired by a concept we apply in our Intentional Creativity classes – the Muse,” explains Sophia, owner, artist, and gallery curator. “The Muse is a reminder of the beauty, self-expression, and love in all of us. Musette is a space to honor that.”

Shiloh Sophia’s personal evolution as an artist began in childhood and her body of work, 25 years in the making, is focused on an approach called Intentional Creativity. It informs everything she produces – paintings, her custom art courses, her books, teachings, even the gallery’s interior design. 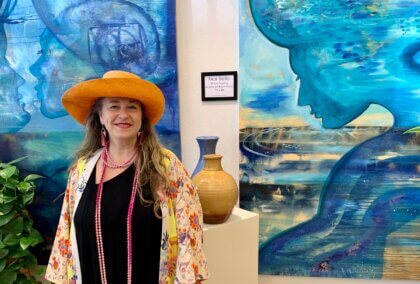 “Intentional Creativity is a mindfulness practice that can be applied to any medium,” she says. “It isn’t a style of art, it is a lifestyle.”

While this latest shop may be new, Shiloh Sophia’s relationship with Sonoma starts at birth and is closely intertwined with her family history. Her history involves a creative matriarchal lineage encompassing multiple generations of female artists and businesswomen who passed their gifts along since the early 1930s

Things first began with Eden McCloud and Caron McCloud (Karen Johnson), Shiloh Sophia’s grandmother and mother. The two women entrepreneurs had a seamstress business and dress shops in Glen Ellen and the Sonoma Plaza with original designs and textile art. Other members of the family, her aunt Janet Seaforth (Grant) and Sue Hoya Sellars, who was like a second mother to Shiloh, were also in business making pottery. 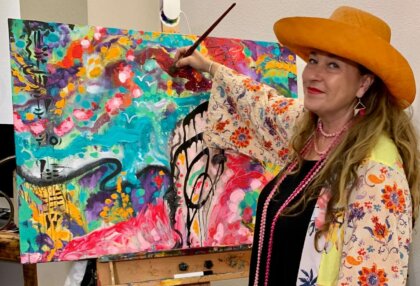 When Shiloh was about a year old, the family moved to Napa Street in Sonoma. She still remembers looking out at the Plaza from the balcony and being told that she took her first steps in the Sonoma plaza exactly at the corner of First Street East and Napa Street. As an adult artist, Shiloh knew she was an artist and wanted to open a gallery and follow in the footsteps of her creative family.

Shiloh has been the owner of several highly successful galleries over the course of her career.  The first was the Color of Woman gallery in the Sonoma Court Shops, with a second location in Sausalito. Both remained open for several years but when opportunity knocked, Shiloh moved the operation to San Francisco to a 7,000 square-foot gallery. This is where she also began teaching and quickly developed a student following. She eventually had locations in Mendocino, for five years, and Healdsburg for 10 years before returning full circle back to Sonoma in 2016.

The common thread for all of the galleries, she says, was to provide representation for not only her own fine art but also the collections of the women in her family and many other female artists.

Shiloh closed her Healdsburg Gallery in 2016 after a sold-out show. She was ready to focus on teaching art instead of selling art. Under her guidance, MUSEA now has multiple creativity Certifications which train teachers, guides, coaches, and practitioners to work with others in Intentional Creativity.

The return to Sonoma, she says, was the feeling of “coming home,” called back to, “these trees, Sonoma Mountain, and the moon that is like no other.” 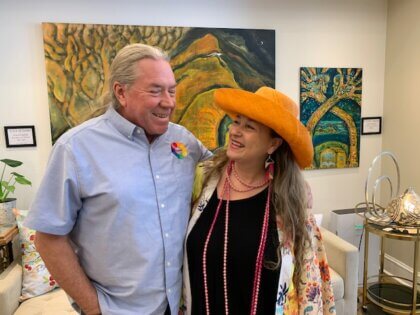 In 2016, Shiloh and Jonathan moved their personal residence back to the Sonoma area purchasing the “Styles and Stone” property at 75 Fremont Drive. They moved their highly successful art school and gallery into the space as well, often running it like a little resort. AFter the downtime of the pandemic, they are excited to reopen with a dynamic calendar of experiences including Muse Days daylong classes, Moving Meditations, and 3-day Retreats, as well as Guided Tours led by the artist.

Jonathan, a chef, restaurateur, winemaker, farmer, and filmmaker works side by side with Shiloh and will be offering an apothecary line of products in the store including tea, chocolate, olive oil, and other culinary offerings. The couple hosts supper clubs in person and plans for catered events and virtual wine education.

In the new space, the McClouds wish to offer the community a space where people can freely engage in the feeling of art and the artist’s lifestyle. A working studio where anyone can view themselves as an artist. “Our philosophy is that everyone is creative. Given the tools and space to express ourselves, we all have something to say through self-expression.” 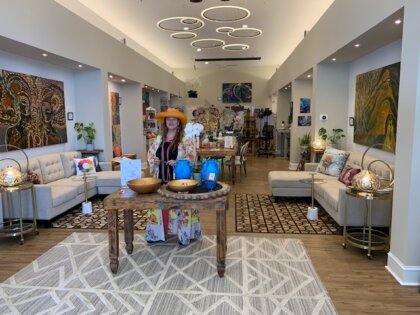