Story through song: the collaborative art of musical theater 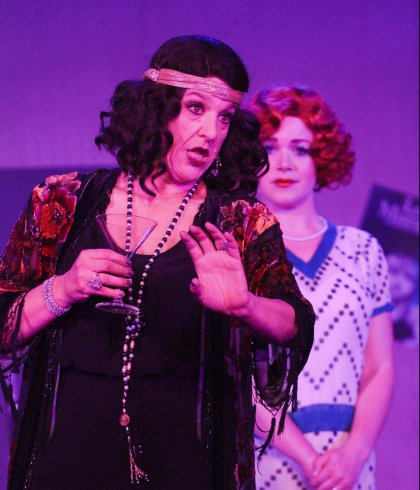 People suddenly break into song and dance. Why do they do that?

Yet not everyone understands or appreciates musical theater as a form of storytelling. If you happen to be one of those people, Sonoma Arts Live’s production of The Drowsy Chaperone is the perfect musical for you. It is a parody of American musical comedies from the 1920s and ‘30s, lovingly and humorously elucidated by Man in a Chair.

The narrator opens the show empathetic to theatergoers, sharing his pre-curtain prayer: “Oh, Dear God, please let it be a good show, and let it be short!” Then, he brings the magic of musical theater to life for the audience by playing his beloved cast recording of a fictional Jazz Age production called The Drowsy Chaperone. 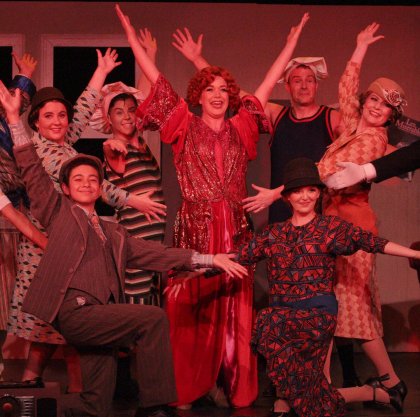 Throughout the performance, he comments about musical theater conventions, the characters, the actors, the music, and other elements. Occasionally, he inserts himself into the action, invisible to the players. How can that be?

When a storyteller creates a world, the audience agrees to accept the given premises. “A duck walks into a bar and says to the bartender…” In this example, the storyteller has created a world in which ducks talk and swig martinis and the story’s receivers go along with the reality of that world because it’s fun and there is the promise of an entertaining punchline.

Theatergoers do the same thing. They know they are watching a pretend reality on stage but agree to pretend they don’t know, to be transported to that alternate reality. This agreement is one way the audience actively contributes to a theatrical production. The willing suspension of disbelief is an essential component.

A common complaint about the form is that it is unrealistic when people break into song and dance. Why do they do that? 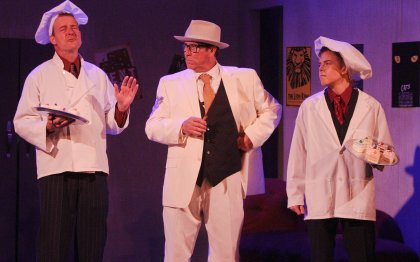 Music and dance enhance the story told in the script or “book.”

When the words in a story’s script aren’t sufficient to express what a character feels, music helps voice emotions powerfully. Song lyrics begin as an extension of dialogue and use the characters’ speech patterns to continue telling the story. When feelings are too big to voice or contain through song, the energy and story are communicated physically, through dance or dance in combination with singing.

These songs have specific functions. Opening numbers help establish a musical’s mood, setting, and themes. They are often expository scenes told with a large ensemble. A song may reprise as a story develops or a character changes. “I am” songs express how a character feels at a particular moment. In The King and I, Anna sings “I Whistle a Happy Tune” when she disembarks onto foreign soil and is afraid of what lies ahead in her new life. “I want” songs express a character’s hopes and dreams. Eliza Dolittle sings, “All I want is a room somewhere, far away from the cold night air,” in My Fair Lady’s “Wouldn’t It Be Loverly.” Characters express their thoughts to the audience with inner monologue songs like “Adelaide’s Lament” from Guys and Dolls. There are also comedy numbers, conflict, narration, summary, and climactic songs.

The Drowsy Chaperone, Sonoma Arts Live’s season finale, has a strong cast of favorite actors including Tim Setzer as Man in Chair, Kim Williams as Mrs. Tottendale, Sean O’Brien as the Underling and Dani Beem in the titular role. Michael Ross directs this production with Musical Director Sherrill Peterson. It is being co-produced by Annie Bauer and performed with special permission from Musical Theater International.

The Drowsy Chaperone premiered in Toronto in 1998 and opened on Broadway in 2006. It won five Tony Awards, seven Drama Desk Awards, and was nominated for multiple Broadway and West End theater awards. The book was written by Bob Martin and Don McKellar with music and lyrics written by Lisa Lambert and Greg Morrison.

The Drowsy Chaperone, July 15-31 on The Rotary Stage at Andrews Hall, in the Sonoma Community Center, 276 E. Napa St. Thursday through Saturday performances are at 7:30 p.m. and Sunday matinees are at 2 p.m. Find tickets, info and safety info: sonomaartslive.org or call 707-484-4874.

Photos from the Sonoma Arts Live production of The Drowsy Chaperone by Eric Chazankin.