The passion of Hilda Swartz 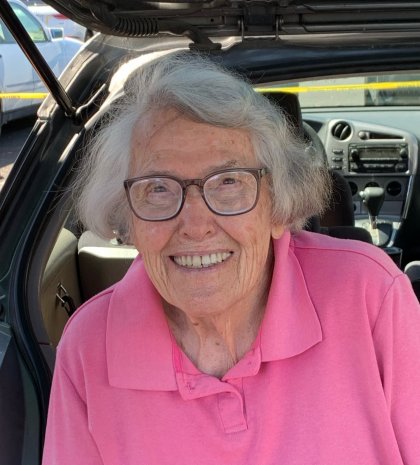 I first met Hilda Swartz thirty-some-odd years ago. My wife Norma and I had just moved to Sonoma, and as the cook in the family I quickly learned about the local farmers market, one of our community’s ongoing miracles. Hilda is the beating heart of the market, a tall, imposing woman with a natural sense of command and presence who, like a composer before an orchestra, manages to pull together a disparate collection of local farmers into a working whole. Going to the market quickly became one of the highlights of my week. It still is.

Neither Hilda nor I are as young as we once were; I caught up with Hilda last week and suggested it was time for an article about her in The Sun, and she readily agreed.

Born in Southern California at Loma Linda Hospital in 1934, Hilda grew up helping her parents and grandparents run the family farm. Her father grew peaches, cherries, and table grapes on ten acres. This was just after the worst of the Great Depression, and her father had a delivery route traveling to coastal towns in the area where he would sell his produce. The popularity of his tree-ripened peaches was so great, Hilda recalls, that “there was always a line around the store in advance of his arrival.” Hilda did chores around the farm, taking care of their cow, goat, rabbits, and chickens. She also became a master peach packer. “I was paid ten cents a box,” she recalls, “and felt really rich after packing 100 boxes a day!” That farm experience influenced the rest of Hilda’s life.

Growing older, Hilda left the farm to attend Pasadena City College, and later San Francisco State University and Longbeach State College, where she earned her master’s degree. As a Home Economics teacher in inner city schools in Watts, she met her husband, Gordon, an ex-Marine who was working as an assistant track coach. They were married for 39 years, until his death.

Hilda proudly recounts that she was the first Home Economics teacher with mixed classes of boys and girls. She recalls that Larry, a six-foot-four basketball player, approached her wanting to learn to prepare healthy food. “Once he entered the class,” she notes, “all sorts of boys enrolled.” After teaching at three different junior colleges in the San Diego area, Hilda left teaching in 1979 and moved with her husband to Oakmont in Sonoma Valley.

After meeting Sara Lee Kunde, Hilda began working at fairs with 4H members, and began the Chef’s Program at the local Harvest Fair. “Guy Fieri was one of the first chefs to participate, and was also the first chef to visit the Sonoma Farmers Market,” she recalls.

The Sonoma market began in 1985, when Hilda was working with Kozlowski Farms in Santa Rosa. In 1987 she was interviewed and hired to run Sonoma’s Farmers Market, which began with ten vendors. Open all year beginning in 1988, the local Friday market now has 32 vendors, including Paul Wirtz, one of the original 10. Hilda ran both the Friday market and the Tuesday night market. Of the two, the Tuesday night market was the most challenging.

I recall some of those challenges. When I served on the Sonoma City Council in the 1990s, councilmember Louie Ramponi was not a fan of the market, and regularly complained about finding discarded Corn Dog sticks in the parking lot. Restaurants around the Plaza also complained. As Hilda  puts it, “running the Tuesday market eventually became an ongoing battle,” and she’s pleased to be just managing the Friday market.

I continue to shop weekly at the Friday market, and Hilda, the honorary grandmother to all the kids at the market, is always there to say hello. Plans for her replacement are ongoing, and she credits the market board chair Austin Lely for his support, noting that it was his grandfather who first hired her, along with Anne Teller.

The oldest market manager in Sonoma County, Hilda’s commitment to good food and local small farmers has deep roots in her own farming experience. “My father would have loved to have had farmers markets,” she explains. Now planning to become part-time, “Maybe,” she’s committed to work as long as she’s able. “I have the best board, the best vendors, the best customers,” she says proudly, her passion showing. “Last Friday we counted 1,059 customers. We’ve never hit the thousand mark before!”