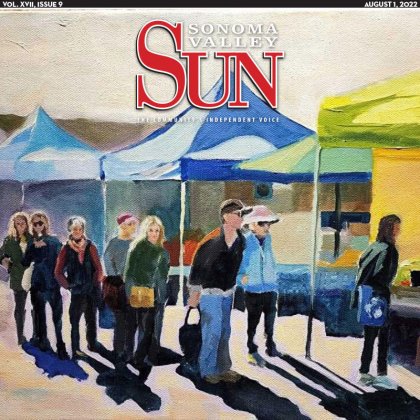 When the phrase “farmers market” comes to mind, most Sonoma residents probably think first of their local Tuesday evening market. Situated on the Plaza, the Tuesday event offers a wide array of locally-sourced produce, food trucks, and even live music.

But when it comes to practicality, the party atmosphere of Tuesday night’s market may not be the most fitting choice. Understated but just as revered, Sonoma’s Friday morning market epitomizes the most fundamental element of a farmers market: simply a place to buy fresh fruits and vegetables.

Set in the Depot Park parking lot between Arnold Field and the bike path, the Friday market runs from 9 a.m. to 12:30 pm. Vendors array in two rows along the lot, creating a wide walkway in between for customers to peruse the various stands.

The market consists of 32 regular vendors, 12 of whom sell certified organic produce. Among these farm stands, both The Patch and Paul’s Produce stand out as crowd favorites. Customers swarmed their tents on a recent bright Friday morning, while lighter traffic checked out the processed food and artisanal offering at other stands.

Longtime farmer Lázaro Calderón and his family run The Patch. Lázaro has owned the business for over 20 years. During his first couple of months as owner, he made the decision to sell his produce at farmers markets. Soon after, the roadside stand was transformed into a multifaceted business.

One of Lázaro’s initial endeavors was the Friday morning market in Sonoma. Since their first appearance in 2000, he and his six-person crew have worked tirelessly to show up every single Friday.

“As soon as we start the season, it’s very rare that we’ll miss a market unless the market shuts down or we run out of staff,” Lázaro says. “People rely on us. That’s one of the reasons why we have such a huge following.”

Currently, The Patch occupies 24 acres of farmland, six of which are located in the heart of Sonoma on Second Street East, just a few blocks from the Friday market. Many of The Patch’s  regulars appreciate that the produce is grown just minutes from where it is sold.

The Patch’s remaining acreage is in Santa Rosa. Lázaro distributes the produce grown in this region to ten other farmers markets throughout Sonoma County and Napa Valley.

Many Friday market vendors including The Patch sell their products at Tuesday night’s event. But unlike Tuesday’s, Friday’s market operates year-round and remained open even during the initial stages of COVID. Some vendors have found this consistency advantageous for business, even though it may mean a slightly smaller customer count.

Paul Wirtz, owner of Paul’s Produce, sells his products exclusively at the Friday morning market. He used to participate in the Tuesday market but dropped it in 2018 when sales became too low.

Paul and his wife Candi Edmondson have been vending at the Friday market since it opened in 1985. According to Candi, the Tuesday market was far busier than the Friday market until 2005. That year, Friday’s sales surpassed Tuesday’s, and the pair was forced to discontinue business at Tuesday’s event.

Though Candi attributes their business’s dwindling profits in the early 2000s to a market-wide decrease in customers, a more recent concern for produce stands may be a changing perception regarding the purpose of farmers markets. While Friday customers showed up early, shopped with intention and left with bags full of fresh produce, Tuesday night goers arrived with blankets and bottles of wine, waited in long lines for steaming plates of prepared food, and seemed to pay far less attention to the farm stands.

But not all fresh-produce vendors share this concern. Lázaro finds it easy to do well in both markets due to The Patch’s popularity among Sonoma residents. According to him, the Friday morning hours often conflict with clients’ work schedules. The Tuesday night market, therefore, gives weekday workers an opportunity to buy his produce.

The primary obstacle The Patch faced this past year was abnormal weather conditions. While their tomatoes would normally be flourishing by early summer, a string of unusually cold nights has rendered this year’s harvest unsatisfactory.

“What we really need are stable weather patterns, not intense heat,” he says. “Right now, we have cool mornings, hot days and then really, really cold nights, and it just doesn’t work like that. We need warm nights so we can have more tomatoes because they ripen at nighttime.”

Similarly, Paul and Candi have experienced weather problems for several of their own crops. This past year, heat spikes significantly reduced their lettuce yields.

But despite an unusual climate and an evolving perception of farmers markets, farm stands like The Patch and Paul’s Produce won’t be disappearing anytime soon. The mere number of years they’ve been operating is a testament to our lasting reliance on fresh and local produce.

One thought on “Walking the Friday Farmers Market”