Reversion to the mean 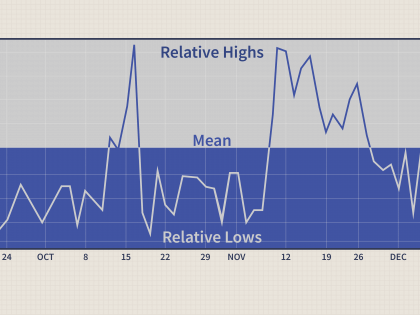 In statistics, ‘reversion to the mean’ is a term used to describe that observation of the extreme is followed by observation of the less extreme, or one might say, a more normal average. In other words, no matter how wild results may appear, over time they return closer to normal. The same may be said of human behavior, which can veer into extreme instability, but over the long haul returns to stable equilibrium.

Like many words in English, the word ‘mean’ has several uses; in addition to indicating ‘indicates,’ it can indicate ‘average,” but it can also indicate ‘unkind.’ The context in which the word is used determines it meaning.

The application of statistical terms to describe social behavior is tempting, and in the age of the Internet ‘reversion to the unkind’ seems an apt variation; the level of unkindness flooding the web might indicate that meanness is humanity’s statistical normal. Sure, photos of cute kittens, puppies, and babies still get ‘likes’ and emoji hearts, but almost anything else of a more serious nature, be it political, philosophical, satirical, environmental, or gastronomical, generates taunts, insults, and downright hatefulness. Is humanity at a new extreme or is this a return to average behavior?

Rhetorically, ad hominem attacks are considered the lowest form of argument. Insulting an opponent, questioning their integrity, intelligence, morality, or decency rather than engaging with their opinions or beliefs, was once seen as extreme, but today has been normalized. This, combined with the liberal use of what comedian George Carlin famously designated as the ‘seven dirty words,’ has morphed the public sphere into a whirlpool of nastiness. Perhaps, however, this is typical of how people treat each other and it’s politeness and decorum that are the exceptions.

While traveling in Europe several years ago, I noticed graffiti scratched and chiseled into stones hundreds of years ago by builders and various inhabitants at a 15th century castle in Prague. Our tour guide translated it for us. ‘The King is Shit’ read some, others were more graphic. Graffiti has always been the most primitive form of social media.

Anger is not new, and spewing it at others is likely some sort of primitive survival technique. For human males, particularly, aggressive intimidation plays a major role in relationship management, keeping potential opponents at bay through shame, fear, and intimidation while propping up ego and social status. The proliferation of guns displays a similar socio/psychological role. The effectiveness of anger, as primitive as it may be, is indisputable, although a substantial effort of modern society is spent coping with its damaging effects, although law enforcement officers screaming obscenities while pointing lethal weapons at suspects would seem to promote the very sort of violent behavior they purport to curtail. Go figure.

The major religions of the world all emphasize coping with anger and its effects, ‘Thou shalt not kill’ and all that, but there’s no precept or commandment saying ‘Thou shalt be kind.” Even if there were, I suspect it would be no more effective than the current set of commandments, which appear to indicate how we are actually expected to behave and say “Don’t do it.” It seems that the spiritual leaders who understood human nature also knew about ‘reversion to the mean.’

This brings me to the words of the Dalai Lama, who when asked about his religion answered, “My religion is kindness.” Amen to that.