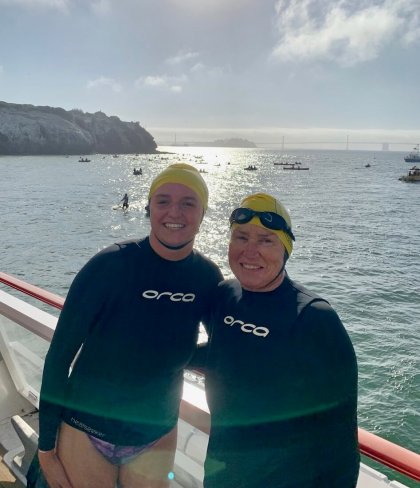 On a very hot Labor Day, Kaeti Bailie jumped into the cold waters of San Francisco Bay off Alcatraz Island and swam, without a wetsuit, 1.27 miles of open water in 56 minutes. It was her eighth time participating in the Alcatraz Invitational, and the 77- year-old took first place in the female 66-99 age division.

Bailie, former owner and proprietor of Artifax on the Plaza, and mother of three, all locals, grew up in San Diego swimming. She started again at age 49. Through a swimming friend, she joined Pacific Masters and began to participate in “open water” events, in Berryessa, around the Santa Cruz Pier, then, 18 or 19 years ago, Alcatraz.

Acknowledging the aura around swimming off the legendary prison island, Kaeti points out that the event is run by South End Rowing Club, and it is “comforting that they have lots of rowers out there, in kayaks, on paddle boards.” The swim is started on a slack tide, between incoming and outgoing. The participants are transported by a Red and White ferry offshore Alcatraz, where they get 500 entrants into the water within five minutes. “Jump,” says an official to three swimmers lined up by a side door of the ferry; five seconds later, the command to the next three. Swimmers enter the water from both sides of the ferry.

In 2019 her granddaughter Kimberly Uzzo, then a freshman at UCLA, took part for the first time. “Kim was in the group right after me. She joined me, and our stroke began to line up. “We were really in sync. You feel united.” Continuing, the open-water veteran described it as “a wordless sharing.” Buoyed by the swells, it’s easy to get off course. “It’s a lot to do with navigation.”

Her granddaughter was on the swim team and water polo team at Sonoma Valley High, where she was Salutatorian in 2018. So the possibility of someday joining Kaeti for the Alcatraz swim had been floated. She was playing club water polo at UCLA, so she decided to do it. She calls her grandmother “such a rock star, the biggest role model of my life. I was so grateful to be able to share this experience with her.”

Going on, “She is the pinnacle of consistent, calm, and steady, so even though I’m slower, I could stay with her.” In 2019 the water was choppy; in 2021, it was much smoother for their swim together. For the first swim, she said she wasn’t nervous until she saw her grandma jump ahead of her. Kimberly looked over at her mother, who had come on the ferry as a spectator. Then she jumped. She remembers opening her eyes and seeing her grandma swimming with the Golden Gate behind her. “I had never felt anything like it, such a confident feeling,” as she swam with her “strong and capable” grandmother. “It was really really fun.” 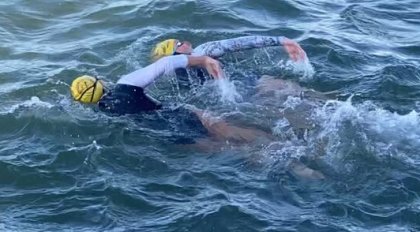 Kaeti calls swimming a blessing in her life. She elaborates, describing her many travels to swim with a group of international friends. When younger, she swam the Maui channel, and in a relay, the Catalina channel. She has done open water swims in  Greece,  Sicily, Italy, three times in Turkey. She swam in an event  from Baker Beach in SF  under the Golden Gate to Marin. And the Bridge to Bridge, Golden Gate to Bay. That race is timed for a king tide. “It’s like you’re in a rushing river; you really feel you’re a part of the Bay.” She remarks, “Long-distance swimmers have a great reverence for the ocean. It’s humbling. Only through the good graces of the Bay are you able to do it.”

She talked about swimming as you get older, affirming that “you can retain your pace, not slow down that much.” Comparing long-distance swimming to endurance walking, as opposed to running, she affirms that you can go for a long time. She acknowledges “it takes skill and stamina, yes, but you’d be surprised at how many older swimmers there are.”  In 2021 Bailie swam in a 20 km event in Sicily. It took nine hours, going at a really slow pace, being fed energy drinks or “goo” every half-hour.

When in 2019 Allyson, 15-year server at the Red Grape and almost as long Seeds of Learning volunteer and board member, accompanied the two on the ferry out to Alcatraz Island as a spectator, she thought  how wonderful it was for her to watch Kimberly share this special experience with her grandmother. She did not think of doing it herself.

But in early January of this year, she was reading a book of her mother’s poems, Breathing Underwater. Becoming curious about what so fascinated her mother about swimming, she decided to try lap swimming with her at the Aquatic Center in the Springs. Before the week was out, she got a membership and the daily half-hour swims together became a focus of her life. 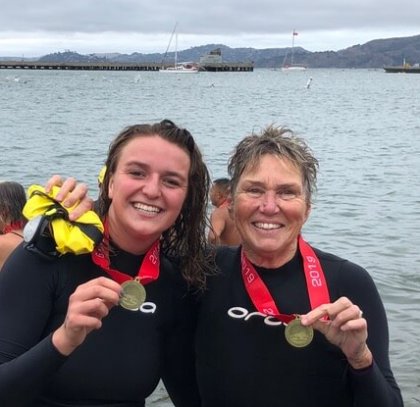 The 56-year-old, who had never done much swimming, says she marveled at herself, thinking, “Who is this woman who’s taking over my body? I don’t know her but I like her.”

By April she had started thinking “maybe” about Alcatraz. In July she went down alone to San Francisco to Aquatic Park near the foot of Hyde Street to try the water. Wearing just a neoprene vest and rash guard sleeves over her bathing suit, she realized it was OK. They signed up for Alcatraz, for the “skins” division (no wetsuit).

Talking about the open water swim, Allyson said it was “such an honor to be with my mom. I felt confident because of her confidence. It had been wonderful for me to watch Kimberly share this experience with her grandmother, and I feel so fortunate to have joined in with them.” She continued about her awareness of the mother-child dynamic, swimming on the side her mother breathes on. Feeling like a baby whale alongside its mother, she stroked in sync. A couple of times she felt a tug on her heel as her mother corrected her from veering to the right, “heading out toward the Golden Gate!” Allyson concluded about the event, “It was one of the special moments of my whole life.”

The plan for all three – grandmother, mother, and daughter – to swim together on September 11 in the one-mile La Jolla Cove Swim was upended by Covid and a hurricane potentially bringing six-foot waves and pollution to San Diego waters. But Kaeti, Allyson, and Kimberly plan to swim in open water together in Aquatic Park, where the Alcatraz Race ends, before the youngest leaves on an eight-month South American journey. And Kaeti is dreaming of the two generations joining her for an international open water swim in 2023.