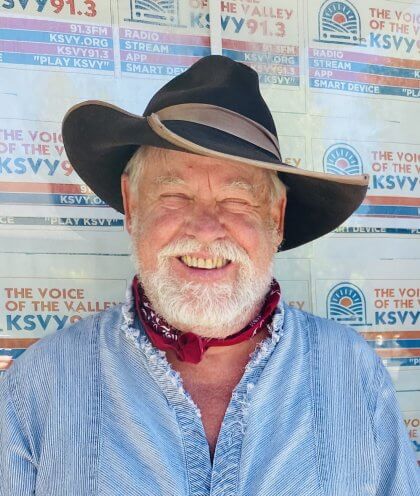 Sonoma history actor George Webber has an active imagination. Growing up in Des Moines, Iowa in the 1960s he would always be found in the woods, playing cowboys and Indians. His family’s Victorian home was built in 1880, high atop a ridge leading down to the Racoon River; it featured a large backyard next to hundreds of acres of green, untouched Iowan oak forest.

What happened in those woods, he says, connects directly with who he is today. “Most of the time I was alone in the woods, watching leaves blow in the wind and listening to birds,” George says. “I would create stories that required a great deal of running through the woods on secret paths while avoiding imaginary arrows, and using sticks as rifles to fight off evil-doers.”

Today, in a cultural landscape radically changed by overwhelming choice, it’s easy to forget how single-minded American popular culture used to be. In the early 1960s, when George was in grade school, there were only three commercial channels on TV, four counting PBS. Everyone watched the same shows, and back then, it was all about westerns. “I would pretend I was Roy Rogers, king of the cowboys,” George says, “but I did try to even out the imaginary mayhem in the woods by also portraying Indians driven to vengeance by the terrible White Man.”

George also acted in local children’s theater, beginning a life-long love of performance. He read classic playwrights like Checkov, Ibsen, and Tennessee Williams, and dreamed of writing plays. George’s father was the kind who would always pull the car over to read historical landmarks on the road, creating an enduring fascination with history.

A love of history, a love of the west, and a love of theater – these three attributes inexorably brought George to Sonoma and our Sonoma volunteer radio station KSVY, where on Sunday, September 18 he will present the 500th episode of his long running scripted Western melodrama: Radio Theatre of the Wild West. “I am thrilled to have had the show running since September of 2004; it’s been a self-induced master’s degree in Western history and scriptwriting.”

Hosted by George, local voice-actor Butch Engle, and musician and historian CW Bayer, Radio Theatre of the Wild West airs every Sunday at 6 p.m. on 91.3 FM, and also on the internet at KSVY.org. The show portrays cowboys who just happened to appear in the pleasant town of Sonoma and decided to stay a spell. George is Wild West Willie, Butch Engle portrays Rattlesnake Dan, and CW Bayer voices the character of Virginny. In addition to their original, scripted western banter, these three perform in the show-within-a-show: “Western Hijinks and Hilarity at the Holy Mountain Mine.”

This long running serial is an entire creation straight from George’s backyard woods, and tells the story of two crusty beaver trappers turned gold miners – Bear Claw Bob and Old Cougar Face, who find gold and so much more on the banks of the Yuba River in 1848. CW Bayer acts the parts of Eli Walker and Aristotle Freeman, Butch Engle portrays Bear Claw Bob, Kawan the Talking Fox, and Murderin’ Mike, and George Webber brings to life Old Cougar Face, Miss Peggy, and the Reverend.

“I want to thank Bill Hammett, who started KSVY all those years ago, and Bob Taylor and Ronny Joe Grooms who are now taking KSVY to new heights,” says George. “Radio Theatre is a unique and marvelous art form, and I am beyond stoked to have the amazing voice artists Butch and CW with me in the studio – I am truly living the life I dreamed of back in those Iowan woods.”