As a teen, he was kicked out of Hanna school. Now he teaches there. 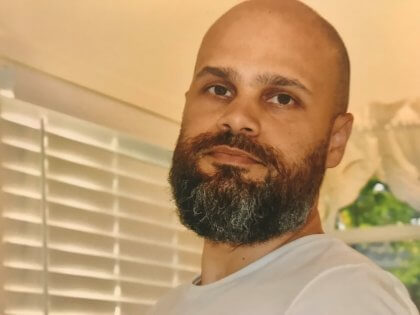 Tobhiyah Holmes spent a short time at Hanna Boys Center as a student in the mid-90s. Within the span of 18 months, he was asked to leave, twice. And yet, his brief tenure here was powerful enough to impact the course of the rest of his life.

Growing up in East Oakland, Tobhiyah was a model student – he represented his school at the Math Olympics and was tapped for acceptance into the gifted student program. He was at the top of his class. Then his mom accepted a better-paying job in Marin County and they relocated.

“Moving to an affluent community, we weren’t ready for the culture shock,” he says. “I was labeled as being from East Oakland and there was stigma there. The curriculum was nearly two years further along in material than in my previous school and I struggled, which validated their assumptions about my inability to perform. I internalized it and thought I wasn’t as smart as the others.”

Tobhiyah went from being at the top of his class to the bottom. The downward spiral affected his behavior as well and by the time he entered high school, his family had arranged for his placement at Hanna. His grandparents had lived in Sonoma since 1949; his grandfather had even served as mayor of the city. “They knew about Hanna,” he says. “My family always championed me; they believed this place would be good for me.”

“The program design was emotional triage,” he says. “The expectation was to stay for one year and the strategy was to immediately address all the things that were preventing you from self-actualization, then teach the skills necessary to support personal growth and integration back into home life and the community. “

Tobhiyah attests that what happened after he left the program speaks the most about Hanna’s character and what really makes this place special. “Several years after leaving, I was working part-time at Foot Locker. Unbeknownst to me, Hanna had been following my path. One day, a Hanna employee that I knew ‘just happened’ to run into me at my job. She recommended that I apply for the scholarship program, which provides financial support for higher education. I did just that and I was awarded a scholarship that largely financed my undergrad degree at UC Davis.”

After graduation, Tobhiyah earned his first MA in Thai Studies at a university in Bangkok with a career goal of working with embassies in Southeast Asia. He decided to pursue teaching as a profession instead and earned his second MA in Reading Literacy from Cal State Fullerton.

For many years, Tobiayah lived abroad working as a teacher; always, when visiting the states, he would spend time at Hanna, teaching on campus during the summer. Eventually, family matters called him home and he set his sights on securing a full-time teaching position at Hanna Center’s High School. “Placement on the faculty was almost impossible at the time,” he says, “as positions would rarely turn over because leaving a teaching job at Hanna was like leaving family. After three years, I finally was offered a faculty position.”

Most recently, Tobhiyah is pursuing formalized training at Sonoma State to become a certified special education teacher to support his new role as a Special Education specialist and teacher coach – making sure the needs of all Hanna students are being met.

Eight years into his teaching position at Hanna, but many more as a prior volunteer, Tobhiyah says that today, he sees himself in a lot of the students. “Definitely karmic retribution,” he says. “Being a lost child and not knowing how to transition into adulthood – there is fear with that. I tell them – “This is happening, whether you want it to or not. You can choose how it happens; you can step into that role and take ownership and be in control. Or you can keep avoiding it, and eventually, it’s just put on you and you don’t get a choice anymore. My goal is to empower them to be the authors of their own experience.”

2 thoughts on “As a teen, he was kicked out of Hanna school. Now he teaches there.”