The cost of freedom 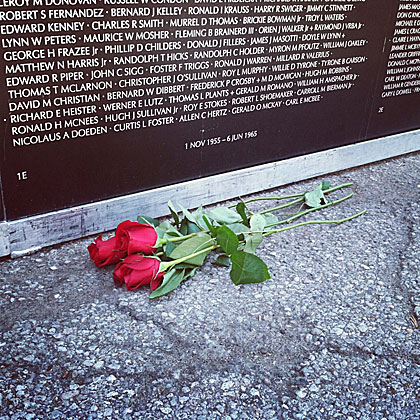 Dan Parker remembers the day vividly. He was 14, with his family, visiting the National Cemetery of the Pacific in Honolulu. Stone after stone, line after line, name after name, the list of WW II veterans killed in action seemed endless.

“It touched my life forever,” he says.

Now commander of Sonoma’s Veterans of Foreign War Post #1943, Parker spent Tuesday at the Veterans Building, preparing for the Cost of Freedom Tribute, which includes a replica of Vietnam Memorial Wall.

“This week, somebody will come here,” he said, surveying the then-empty grounds,  “and it will touch their own life forever.”

The traveling exhibition, making its first and only stop in the region, includes tributes to veterans of World War II and the Korean War, as well as those from present day conflicts in Iraq and Afghanistan. There is a 9/11 Memorial and a display honoring first responders.

Parker said as many as 20,000 visitors will visit the free event, which will be open for public display around the clock through Monday at 4 p.m.

The Cost of Freedom Tribute travels under the motto ”honor, respect, remember.” To that, Parker informally adds the word ’healing.’ Veterans and their families who would never get a chance to visit the original monument in Washington D.C. may now have that experience.

“Folks will be awed by how big it is,” Parker says. “All those names. All those gray lines.”

The tribute took 20 months of planning for Parker and a committee of several dozen. Volunteers helped set up the exhibits, and will stand watch throughout. Seeing it all come together “is almost a surreal feeling,” Parker says.

For many, communing with the wall will be a deeply emotional experience. “It’s part of the healing,” Parker says. To facilitate that process, professional counseling will be offered. “If people need someone to talk to, there will be somebody here.”

Another important aspect of the five-day event is education. Several high schools will visit the site, and families are encouraged as well. “Kids need to know that people sacrificed their lives to protect this country,” Parker says. “They need to understand that promises this country makes come with a price.”

It’s a price that continues to be paid: the tribute to Middle East casualties grows by the day. “The Gold Tag Wall is perpetual,” he notes. “We’re still losing kids over there.”

And so the cost of freedom rises, and the list of names grows ever longer. “People are tired of war,” Parker says with a sigh. “Nobody wants peace more that a veteran.”

Indoor displays open daily 8 a.m to 8 p.m. (except Monday). Outdoor memorials and exhibits open around the clock. No charge.