Worth it: Dom Pérignon by the glass at Sigh 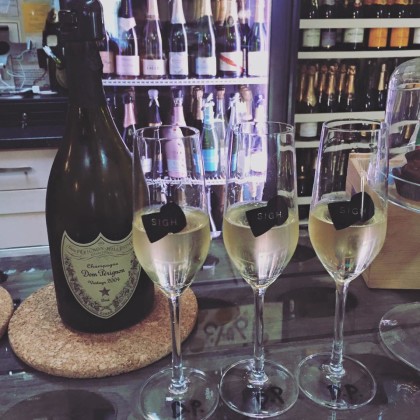 I’m one of those folks that likes to live the good life, but seeks out a deal whenever possible.

Happy hour? You know where I am on Tuesdays (save my barstool at the Plaza Bistro Martin!). Free corkage night? I’ll be there on Wednesday at the Swiss Hotel (hi Sharon!). The box of strange looking fruit that didn’t make the cut that is discounted at the farm stand? Yup. I’m there.

But then this happened: Sigh, Sonoma’s champagne and sparkling wine bar, started serving Dom Pérignon by the glass.

The coveted, very expensive champagne (new vintages average $17o with the older bottles going for $350+) is rarely seen on menus in Sonoma Valley. Leave it for that other valley, right?

In Indiana, I heard occasional stories about people receiving a bottle for their honeymoon from their rich uncle who lives out of state. We would see it in hip hop videos on MTV and period films on TCM. I knew people who had empty bottles, that they had bought empty, displayed in their house – yeah, classy.

Suffice to say, I had never had it before. Until last week.

A group of girlfriends and I went into Sigh on Halloween, enjoying the festivities in Vine Alley, and decided to go big. It was a holiday, after all, and we had been saving up.

Granted, folks, this is a $45 glass of sparkling wine. I’ve had a few $25 glasses in my day, for special occasions or when I’ve been high rolling in Vegas, but, never a $45 glass of bubbles. I could buy a bottle of Gloria Ferrer for that price.

But, it was worth it. To toast loud and proud to each other with a glass of 2004 Dom. It was really worth it (and it has a 94 point score from Wine Spectator, for the record).

Sigh’s staff guided us through the tasting – we also had sips of Veuve Clicquot and Mumm sparkling to compare.

Dom is distinct. It’s a perfect fall bubbly – ripe with a strong earthy nose, with a dried flower scent, even almond. The taste is equally earthy, with spices and fall fruit.

Granted, we make some amazing sparkling wine in Sonoma County, but, even the greatest localvores can agree: nothing beats the occasional champagne treat.

A perfect opportunity to celebrate a success in life, a relationship, or just to treat yourself. Sigh is located in Vine Alley, at 29 E. Napa St., Suite C, Sonoma. 996-2444; sighsonoma.com.