Under the Sun Interview: K.D. McComb 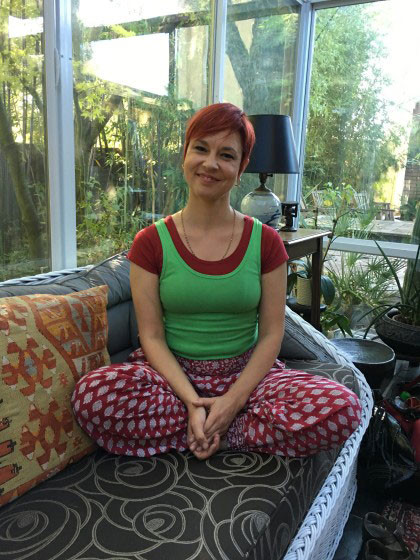 Do you mind telling me what K.D. stands for?

Not at all; it stands for Krishna Devata. I was born into an Ashram community in Vancouver, Canada. Our teacher was Bhaktivedanta Swami. My parents were westerners, and I was raised as a Hindu there for ten years. It was a full immersion experience.

What do you mean by “full immersion?”

No radio. No television. I grew up in a yogic tradition filled with dance, chanting and Hindu practices. I was trained in classical Indian dance, and it set me on a lifelong path of dance.

And here you are in Sonoma Valley.

My family moved to the Bay Area and I eventually married a man who worked for a publishing company called Mandala. We were living in Marin. His relatives, the Goff family, were the original owners of the Chateau St. Jean winery. We visited there, and with our daughter sat beneath trees that his ancestors had planted. I felt a powerful connection with Sonoma Valley. Ultimately, I decided to live here.

I’m told you are a yoga teacher.

Yes, as I said I grew up in a yogic tradition. Here in the the Bay Area I ended up studying with Anna and Daria Halprin, who taught a movement-based expressive arts therapy focused on embodying authentic expression through universal movement. It involves connecting with and listening to one’s inner wisdom. I found myself in asanas — yoga postures — and it brought back memories of my life at the Ashram. I decided to study yoga asanas and received my certification as a teacher from the Purusha School of Yoga. Now I teach at the Yoga Community — an expressive, vibrant by gentle class I hope is inspiring. I use a lot of storystelling. I also have been teaching at Brookdale Senior House, which I love, Temelec Hall and even doing classes for Lisa Murray’s Yoga Community when the weather is warm at the Sonoma Plaza on Sundays.

Your clothes are quite colorful; what’s their story?

I’ve taken up clothing design — I call it elegant active wear — using my connections to India for inspiration. I’ve adapted block print patterned Indian designs used in classical dance. They will be shown on my website: DancingMamaKD.com. They are made in a village in India I’ve been going to since I was five years old — Vrindavan, in Northern India. It’s a pilgrimage city, said to be the birthplace of Krishna. My children and I are about to head there for three weeks. My daughter is 10 years old and my son is eight. We will also go to Mayapur, west of Bengal. I think it’s wonderful for them; it’s our third trip to India as a family and they are gaining a truly international experience.

How do you feel when you return to Sonoma?

There is not a large local Hindu Community here, but I’m producing events like Kirtan — musical chanting — to create community. It’s actually a bit of culture shock returning here after spending time in India wearing a sari. But there is a great level of freedom here, the freedom to just be, to practice yoga and dance movement in public. Sonoma encourages me to be my fullest self.

2 thoughts on “Under the Sun Interview: K.D. McComb”