In Development: Media Arts Program gives teens an inside track 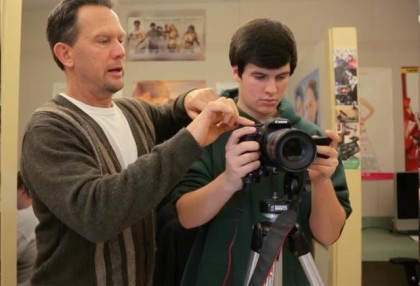 (By Jonathan Farrell) — For Media Arts Instructor Peter Hansen, is film and video program at Sonoma Valley High School is just as valuable as math or science. Not everyone will end up a Spielberg or Tarantino, but all his students will learn tangible skills for an ever-changing media world.

Hansen’s goal is to help a student build a dream job through media arts. “Not every kid is the type to be on a college track,” he says. “There is the type of person who will build a career, enter a trade or be their own business or sole proprietorship, such as a graphics designer or a freelancer.”

Media arts is not just one thing, he says, “and that’s why I love it.”

Hansen, who also provides media/video workshops for Valley middle schoolers, has run the high school program for 15 years. “Teaching and working with over 160 kids is a lot of work,’’ he admits. “If I can help turn a student’s life around, from being a pain to being a star, enthralled about life and wanting to participate in it, that means a lot.”

Thanks to donations from the Sonoma International Film Festival, Hansen’s students have access to state-of-the-art cameras, equipment and editing stations. Even so, Hansen says about half the job is about helping with social values, morals and life-lessons.

When comes to writing a film, it’s all about good old-fashioned storytelling. “I have a degree in journalism and what I try to get across to my students is story, story, story,” he says.

Hansen likens the creative and collaborative process to a treasure hunt. “I love that sense of exploration — helping students use various tools and techniques to tell a good story or to express themselves.”

“We lose that as adults, he says. “But kids are naturally full of wonder, curiosity and imagination.”

The atmosphere at the Sebastiani Theatre is festive. “It’s like they become rock stars for that night,” he said. “A lot of the kids from the school turn up at the screening just to cheer them on. Its as big as a variety game or a sports championship, and all the kids get to participate and experience the excitement.”

Kevin McNeely, executive director of SIFF is very proud of what Hansen has been able to accomplish, calling it, in age of school budget cuts, “a miracle.” Hansen agrees. “Schools can’t afford this program, the equipment, the ever-expanding technology, they just don’t have the budget.”

When Hansen began the Media Arts Program 15 years ago the budget was as thin as a shoestring. He received a meager stipend for his class time and extra hours of work with the students. But now, thanks to SIFF and the “benefactor angels” of Sonoma Valley, as McNeely referred to them, the program is well funded.

The investment made does give a return, Hansen and McKneely agree. They note how many SVHS grads go on to prestigious filmmaking schools and media arts programs. Acceptance into NYU, UCLA and jobs with National Geographic, Cartoon Network, Pixar and Apple where just a few they mentioned.

While many students will graduate and move, the program begins anew in the fall. For Hansen, it’s a great story. “Call it a miracle, fate or serendipity, this teaching job and helping form a media arts program was meant for me.”