Larry Barnett lives in Sonoma where he was elected to three terms on the City Council and served twice as Mayor. A thirty-three-year resident, he currently serves as Chair of Sonoma's Planning Commission. He has been married for 48 years, has two daughters and three grandchildren.

California’s electrical grid, like the nation’s overall, is based upon a centralized, industrial model in which large electricity-producing facilities supply individual homes and businesses through a network of utility wires. Despite the growing popularity of solar energy systems, the burning of greenhouse gas-emitting fossil fuels still supplies the vast majority of the energy used to produce electricity across the grid.

The U.S. Department of Energy defines a micro-grid as “a group of interconnected loads and distributed energy resources (DERs) with clearly defined electrical boundaries that acts as a single, controllable entity with respect to the grid (and can) connect and disconnect from the grid to operate in both grid-connected and island mode.”

In simpler language, the Stone Edge Farm micro-grid can operate as an “island” completely independent of the larger regional electrical grid, or it can be fully integrated into that regional grid as either an energy user or energy supplier. As such, it provides a potential model that can be replicated in other locations and could provide redundancy and resiliency in the event that the larger regional grid is disabled or shut down by unforeseen events.

Perhaps as striking as the technology itself on display at Stone Edge Farm is the philosophy and generosity behind it. In a gesture as remarkably “cutting edge” as his micro-grid project, Mac McQuown is sharing details of the project without any proprietary copyrights or restrictions.

In other words, he’s sharing the benefits of this project with the rest of the world.

Last week a tour of the farm’s various micro-grid components was provided to members attending the Intersolar Conference in San Francisco, who traveled to Sonoma Valley specifically to tour to the farm. The group was welcomed by First District Supervisor Susan Gorin, who noted in her remarks the ways in which what’s being explored at Stone Edge Farm fits into Sonoma County’s growing reputation for clean energy innovation. “Sonoma Valley is becoming known for our out-of-the-box thinking on clean energy,” she noted, and reminded the group that our county was recently one of 16 entities to be recognized as “climate champs” at a White House ceremony. 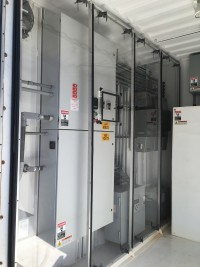 The assembled group then divided into three groups, each led by one of 15 interns from universities across America who are now at Stone Edge Farm to learn about its micro-grid project. Stone Edge provided information that indicate the interns range from high school to post-doctoral students and the institutions they represent include Azusa Pacific University, California Maritime Academy, CSU Chico, CSU East Bay, Humboldt State University, M.I.T., UC San Diego, and the University of North Carolina, Chapel Hill.

Over the course of a couple of hours, the various energy-related “nodes” at the farm were on display; some were energy storage nodes, others energy producing ones. All the nodes are connected with each other, and energy loads balanced and transferred between different locations at the organic farm and vineyard depending upon need. Excess energy produced can also be routed into the regional grid, and sold to PG&E for its use and sold to its customers.

Four different battery technologies are being tested and used on-site; some are non-toxic iron/salt-water batteries that are completely recyclable. Tesla has provided five 50-kilowatt battery units, not yet in use, designed to help handle and store the results of energy surges.