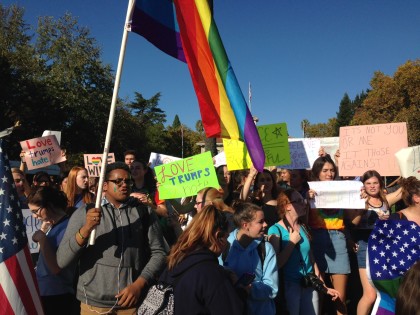 There was a profound and inspiring civics lesson out of  Sonoma Valley High School today, and it was delivered by the 400 or so students who left the campus at 2 p..m. and walked to the Plaza for not so much a protest against a Trump victory as a pep rally for democracy.

The group spoke of unity, of positive political action, of minority rights. It was orderly, courteous and well-mannered, and it put the recent campaign rhetoric, from candidates and media alike, to shame.

“This,” rang one cheer, “is what democracy looks like.” Another: “Love trumps hate.” 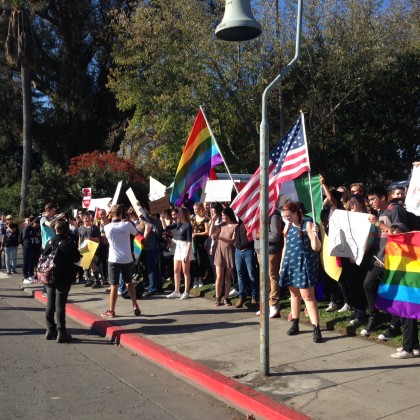 Millennials, look out; if this is the group behind you, get out of the way.

The idea for the “peace walk” spread among students on Wednesday, and earned tacit approval from the school administration. 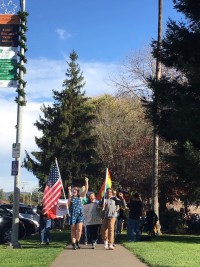 Students walked in groups down Broadway, gathered and made lap around the Plaza and assembled along the City Hall sidewalk. After cheers and flag-waving, when every car horn honking in solidarity was met with a huge roar from the crowd, the group moved to the nearby amphitheatre for comments from student leaders.

They pledged to stay together and stay positive. To guard against injustice and work for positive change.

For all the dramatic oration, there were moments of youthful exuberence. Said one speaker, momentarily overcome with emotion, “I’m just so proud to part of this school.”

The event ended with a rousing rendition of the Sonoma school cheer. Then off they went, to fulfill another pledge — to be back on campus by 3 p.m.