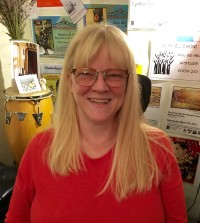 What brought you to Sonoma, Cynthia?

I lived in Los Angeles in the early 80s. I wanted to be an actor or singer! I worked in clubs for quite a while, but it’s actually hard to make a living that way. Things got tougher during the musicians’ and writers’ strikes, very tough. The fact is L.A. is harsh. My cousin lived in Sonoma Valley and Cliff had visited here, and so Cliff and I left L.A. in 2006 and found a house to buy in The Springs.

Ah. Cliff Hugo, my husband. He’s a master bass player. Cliff’s played with top acts, like Ray Charles, Melissa Manchester, Super Tramp. That, plus constant work as a side man.

So did you find work here?

We immediately began to perform. We did the Sonoma Film Festival, played various wineries and entertained at parties. We were regulars at Olive and Vine in Glen Ellen with trios and quartets. Word got around, people heard about me and asked me if I taught voice lessons. Actually, it all happened really quick. Sonoma Valley is like a Hallmark Special. For us, it’s been an embarrassment of riches!

Sounds like you work with a lot of people.

Hmmm. I’ve got 40 voice students who take lessons from time-to-time or regularly. The Choir has 30-35 members, and with 60 songs in our repertoire, we perform concerts and at retirement homes. Our next concert is on May 27th! And of course, at the center there are one-on-one classes, kitchen concerts and all the rest.

I spent years singing Jazz tunes. I did, and still do, a lot of back-up singing, but now its for my students. I love to develop harmony and nowadays technology gives you immediate feedback. But my next concert is June 10th at the Women’s Club, and that’s when we’ll find out what I like to sing now. It’s my once-a-year show. I also sing with a women’s trio, The Quixotics.

Thoughts about the music scene in Sonoma?

It’s lively and active. There are lots of people who want to go out and hear music. The biggest drawback is a lack of adequate venues. The Speakeasy is almost about it.

You have student recitals called “Finding Your Voice”. What’s that about?

What interests me is singing that moves people, singing from the heart. Everyone has a vocal instrument, and I love to see people improve. But for me it’s not about finding someone with great “pipes.” It’s about connecting, it’s about heart. Singing moves people, enlivens them; it’s a healing experience. That’s why I call it Finding Your Voice. There’s great support in this community for people who overcome their fear and bring joy to singing. It’s fabulous.

Have any other plans?

I do like writing and have written several unpublished books. I’d describe them as spiritual-mystery-adventure-romance novels. A new genre! Truthfully, I’m very happy doing this work. Besides, I can’t retire. So I’ll continue doing what I’m doing in the very best way I can.