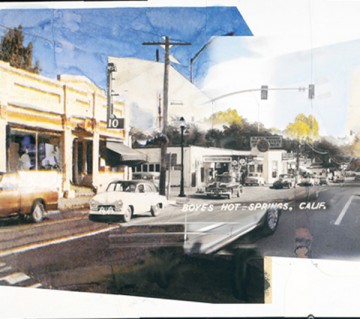 There are two issues facing our Highway 12 commercial corridor that could create lasting negative consequences if the community isn’t proactive.

Possible tearing down of the historic Big Three building

The building has sat empty for 14 months since the Fairmont Sonoma Mission Inn closed the restaurant. It’s starting to show signs of deterioration that occurs when a building is left vacant and unmaintained. It’s at the intersection of Highway 12 and Boyes Boulevard, which locals commonly refer to as the center of Boyes Hot Springs.

According to Michael Acker’s book, “Images of America: The Springs Resort Towns of Sonoma Valley,” the existing Big Three was built in 1924, after the original building, built in 1921, burned down in the great Boyes Hot Springs fire of 1923. Originally called Woodleaf Store, it was managed by Marion Green for 29 years. Green twice was elected president of the Sonoma County Retail Grocers Association, the only woman to hold that position.

The Mission Inn has been quiet regarding its intentions for the property. However, it’s no secret that management would like to have a conference center at SMI. Rumors abound, and there’s good reason for the fear, that SMI will tear down the Big Three to build a conference center. This would not only change the historic character of the Springs’ most important intersection, it would be a land use that is contrary to our community’s vision to have local-serving businesses on Highway 12.

My dream is that SMI would do the community a favor and sell the Big Three property to someone with imagination, who will save the building and convert it into a destination to which both locals and tourists would go. In my 30 plus years in the Valley, SMI has never been successful with use of that property. Various menu alterations where always overpriced for the quality, and even most hotel guests didn’t bother to eat there.

What do we do? Contact SMI management to ask them to not tear down the building and to not let it fall into a state of deterioration. Also, contact our county supervisor, Susan Gorin, to tell her you don’t want to see a conference center at the corner of Boyes Boulevard and Highway 12. If we wait until SMI presents plans to the county, it could be too late.

Medical marijuana businesses have long wanted to locate in the Springs. A few years ago when Valerie Brown was county supervisor, an unpermitted medical marijuana dispensary opened on the east side of Highway 12, near Flowery Elementary School. Residents quickly complained to the county and officials took swift action to shut the illegal dispensary down.

We are in a different political environment now. California’s legalization of marijuana for recreational use takes effect January 1. An increasing number of entrepreneurs are getting into the cannabis business. They are buying up warehouse space in Santa Rosa for cannabis growing and manufacturing, and will be looking for locations for retail outlets.

Our current supervisor has a different relationship with the cannabis industry than did Supervisor Brown. Campaign finance records on the Sonoma County Registrar of Voters website show that Supervisor Gorin last year accepted major campaign donations from three cannabis businesses: $2,894 from Tiffany Devitt of CannaCraft; $2,500 from Jonathan Cachat of Conscious Cannabis Ventures, and $1,500 from Albert Eaddy of Redwood Herbal Alliance. She also received $150 from the Sonoma County Growers Association, which represents marijuana growers.

If we don’t want to see cannabis retailers along the Highway 12 commercial corridor where our children walk to school, to the bus stop, to the skate park, to the teen center, etc., then we need to make that clear now. In addition to telling Supervisor Gorin, I suggest we seek to include in the Springs Specific Plan language that states marijuana retailers and manufacturers aren’t allowed.

The opinions and positions expressed by Sun columnists do not necessarily reflect those of the Sun, its management or editorial board.