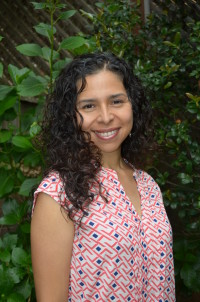 Does the Springs remind you of where you grew up?

Absolutely. Woodland was small then. I’ve returned to a small town environment. It gives me a sense of connectedness, I don’t feel isolated. You’re always running into the people you live and work with. We’ve lived in the Springs since I started working at Flowery.

How did you get to Flowery?

It wasn’t a direct path! I went to college at Santa Clara in the late ‘90s, majoring in Marketing. For three summers I worked for Apple in their Education Marketing department. I spent a lot of time visiting schools. I noticed that I was more interested in what was happening with the students’ learning than in launching a tech application for them. Eventually I understood that my calling was in education. I volunteered at River Glen in San Jose, which was a pioneer dual immersion school. That solidified my idea of becoming a teacher. I graduated in Sociology, then a fifth year at Sac State for my bilingual teaching credential.

Where did you teach?

My first job was with a bilingual fifh-sixth grade class in West Sacramento. Then I spent several years in bilingual classrooms in Galt. My principal sent me to English Language Development training, and tasked me with bringing it back to the school to teach it to the staff, with my classroom as a demo. This opened my eyes to what I might do in education beyond the classroom. I also served on many school committees, and learned how a school functions as a system. I was excited about my interactions with the parents and students.

So did you go for an administrative credential then?

No, I went into the private sector as a professional development instructor in “Best Practices” for English language instruction. I spent two years as a trainer. I would give eight-day intensive trainings, including modeling lessons. Then I returned to coach the teachers at those schools. But I really missed the school setting, being with the students on a daily basis. So at the same time I got a Masters/Administrative credential at CSU Sacramento.

What was your first job?

I worked for a year at an inner city charter school in Oakland as a literacy specialist. Then I launched my admin career, as a vice-principal in Pleasanton. My second post there was in a dual-immersion school. Then came the economic downturn, and all the vice-principals in the district were laid off. My principal came to me with a clipping from the Chronicle about a principal’s job at a school where a team of us had visited as part of a networking grant. She said, “Remember that sweet little school in Sonoma?”

So that was it? That’s how you got here?

Well, it wasn’t that simple. My father had a big role in it. I had been interviewing for other jobs, and I was a finalist for one in a peninsula district that was going to send me to China to study other educational models, and to Harvard to the Principals’ Institute. So I called my dad. He only went through third grade in Mexico. He always believed that we are all humans, that we need to step up and appreciate each other’s cultures and community. He was such a model for me. I asked him for help deciding between the position with amazing professional development opportunities and the one at Flowery. I told him that we had visited Sonoma for Cinco de Mayo and it felt “like what I did this for.” He replied that I already had my answer. “Go back and serve your community.”

None. I’m finishing up my eighth year here. I never imagined I would be at a school this long. We’ve had two children here, and bought a house in the Flowery district. My daughter will start the dual-immersion kindergarten in the fall. We named our son for my dad. As he told me, “We all have to cross over, build that bridge between cultures.”