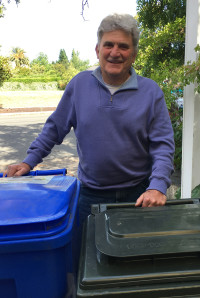 Tell me your story, John.

My family lived in San Francisco, where my father worked for Sunset Scavenger. In 1949, my parents bought a piece of property on Grove Street here in the valley – a shack really, perhaps 20 x 20 feet. We’d come up on weekends. My dad would bring up discarded lumber and bricks from San Francisco and add on to it. He even built a wine cellar with concrete bricks he made himself. It’s still there! He couldn’t stand still.

Did he use the wine cellar?

He’d make his own wine in barrels. He wasn’t really a drinker, but he’d drink his own wine, good or bad. It did made some very good vinegar.

We moved here full time in 1952 after he quit working for Sunset. I was twelve years old and moving here was one of the happiest days of my life! I began attending El Verano School in the sixth grade.

Is that when Sonoma Garbage Collectors, Inc. began?

Not exactly. My father started working at the Petaluma Garbage Company, but when the local Sonoma garbage business came up for sale, he bought it. It was just him and an open dump truck that could hold 15-16 cubic yards of trash. We still own the truck and it’s been in the July 4th parade.

It was hard work back then, I’m sure.

He’d walk down the driveways, dump the household garbage into a big aluminum can he’d carry with a shoulder hook, and then climb seven steps up the back of the truck to dump it in. After I did it a while my legs were hard as wood!

When did you begin?

At 12-years-old I’d join my father on Saturdays, mostly to keep him company. Once I graduated from Sonoma High I worked full time. It was the two of us, mostly. My dad worked into his sixties. Over time we got better trucks — side loaders and rear loaders and we even put wheels on the hooked aluminum cans. We’d service maybe 100 homes a day. We’ve always had a contract with the City of Sonoma and a license from the County for Temelec.

Did the company grow?

I own the company with my wonderful sister, Joanne Meroney, who works in the office. We’ve never wanted it to be big. There are benefits to staying small. Some of the workers have been with the company for 30-40 years. I don’t call them employees; they’re the guys I work with. We’ve had some offers to buy the company, but our rates are so low nobody else could make much money. In Windsor, for example, a 32-gallon household can costs about $24/month. Here in Sonoma, we charge only $13/month.

Have your costs gone up?

It once was free to dump your loads. Now it’s around $120/ton. For a ten-ton load, that’s over $1,000 for one truck. Stage Gulch is a transfer station, only. From there it gets consolidated and shipped out of the county to land fills, except for the yard waste and recyclables.

What happens to that material?

We take the plastic to a 3rd party in Napa who sorts it. They always take it and seem to find buyers for it. People here in Sonoma provide very clean plastic! The yard waste gets ground-up, and we donate it to soil companies or the sanitation district to combine with treated solids. It beats taking it to the dump.

How long will you continue to do this?

I’m 74 and plan on sticking around, Lord willing. I drive a truck, it’s not hard work. I arrive at the yard and our routes begin at 4:30 am. We have three drivers, one for each type of can. There can be some long days, but I see lots of people. The kids love to watch the robot arm pick up cans, and so do some of us old guys!