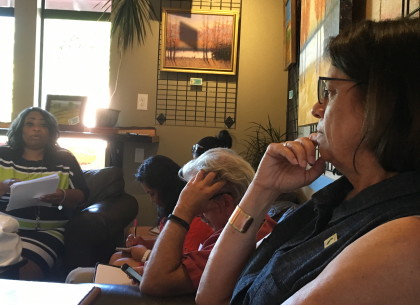 Assemblymember Cecilia Aguiar-Curry, chatting with Springs constituents at the Barking Dog café last week, was asked about campaign donations from special interests. Her reply was as strong as the coffee. “I don’t give a ——,” she responded energetically. “I vote what I think is best for the District.”

It was the first public visit to the area for Aguiar-Curry, who in November won the 4th District seat vacated by Bill Dodd. The campaign included charges about her taking lobby money, but she said she returns checks sent to her from gas, real estate, oil and tobacco.

During the visit, Tom Martin asked about her apparent support for voucher schools, again based on campaign materials. Aguiar-Curry responded that she supports charter schools and any school that can give a second chance to the marginalized. She said she “may not have” voted in favor of the minimum wage for farm workers, due to “too much paperwork.” 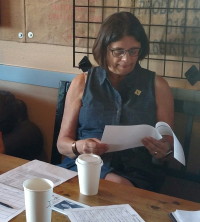 Kitty Wallace sought her support for AB 1269, citing the over 12,000 manufactured homes in the District,

The freshman representative said she waits to see the final draft of any bill before she commits. She described an intensely partisan Assembly, saying “9 out of 10” votes go “reds v. blues”. She said she tries to look at local interests, which may cross party lines.

She said she is sponsoring legislation in support of: prevailing wage for workers removing dead trees; waiver of community matching funds; small storage ponds for farmers (she farms her father’s 80-acres of walnuts and fruit herself); inclusion of rural communities and agriculture in cap and trade; internet for all, with 95 percent of the funding going to rural communities; and consumer protection from payday lenders.