An eco-village for Eldridge? 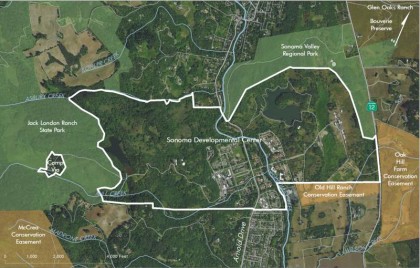 The disposition of the 864-acre property that has housed the Sonoma Developmental Center for decades has been fraught with uncertainty, largely because the State has undertaken a process it has not used before.

“It’s unorthodox,” said Daniel Kim, Director of the Department of General Services, at a Town Hall meeting convened by a panel of public officials working in various aspects of the complex and delicate process of relocating patients and planning for the management of the property after the SDC is closed at the end of the year. In similar instances, the land has been sold.

Neighbors in the adjacent town of Glen Ellen and throughout the Valley have been concerned that the property could fall into the hands of commercial interests, changing the area forever by bringing more tourists, more cars and possibly yet another winery events center and hotel to one of the last remaining swaths of untouched open space such as once defined the area’s rural character. We are all agreed that that land should be protected in its natural state. But opinions differ greatly about what might be the best use of the developed area that constitutes the campus of the SDC, much of it fallen into disuse since the decline of the resident population.

The crying need for affordable housing is pushing up against calls for racehorses and other possible uses. With a rising homeless population, and many residents still unhoused due to the October firestorm, there can be no doubt that houses must be part of the plan; but installing a typical housing development seems to lack imagination and ingenuity in this era of advancing climate change, and at the other extreme, mansions would hardly address the primary needs of an area in which housing has become unaffordable to workers, including middle-income earners such as chefs, teachers and medical employees.

Another pressing need seldom discussed in this traditional agricultural region is, ironically, the lack of farmland. Here in Sonoma County we actually produce less than five percent of the food we eat; much of the rest is exported. The food we eat is delivered in giant trucks sometimes for a distance of 1500 miles. The land meanwhile has gone for wine grapes. The arrival of legal cannabis introduces the likelihood of another crop that is not a source of food. Young farmers eager to grow organic food on small family farms are held back by the unavailability of affordable farmland. In our rapidly changing climate, the ability to grow healthy food close to home and without contributing greenhouse gases or polluting water courses with chemicals seems an immediate and important survival feature.

Some of us have envisaged a community of affordable housing serviced by a renewable energy micro-grid and local water system with 50 acres or so set aside for farming, residents encouraged to work on the property and some central worthwhile income-generating project related to healthy and ecological living or in some other way continuing the work of the Developmental Center.

Since the entire infrastructure and most of the buildings have outlived their useful careers, we would have the unique opportunity to replace the existing structures with a completely sustainable state-of-the-art system.

Only electric cars, scooters and bicycles would be permitted on the property, with other vehicles parked in a lot off-site. Governance of the whole might be managed by a community land trust in which all parties including the state and the county, the local community and the residents would be responsible for holding title to the land and leasing residences and business spaces under 99 year leases.

The community could include a restaurant, a health clinic and a daycare, perhaps an elementary school, a retreat center and community hall for weekend events, a theater, a pool, athletic fields for the use of local teams. The possibilities are endless.

Speakers at the recent Town Hall stressed that the State wants to see a community-driven process led by elected officials including the Board of Supervisors. It is willing to pay the considerable costs of “warm closure” while furnishings are moved off site or sold; funds have already been budgeted for closure costs until June, 2019. In the meantime, the State will be working with the County to establish goals and a process.

If we the people want to see a locally-run, innovative, sustainable community installed on this property with open space protected and maintained for public use, now is the time to step forward.

Stephanie Hiller is a writer who has been working on a proposal for SDC with members of the Sonoma valley housing group and transition Sonoma Valley. [email protected]