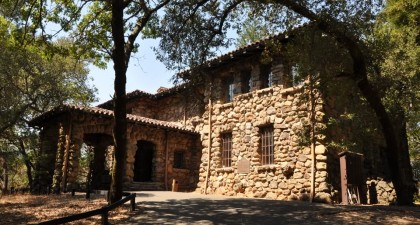 By Jonah Raskin | For The Sun

Grapegrower and winemaker, Mike Benziger, serves as the chair of the board at Jack London Park Partners, the grassroots organization that has managed and operated Jack London State Historic Park since 2012 when Sacramento announced the imminent closure of the 1,200-acre “National Historic Landmark.” Locals rallied, raised money, made improvements and expanded hikes, talks and more. For six years, they’ve kept the whole place up and running, from the Wolf House ruins to the cozy cottage and the museum at House of Happy Walls, a 15,000-square-foot building with stone walls that make it look and feel like a fortress from another era.

“The museum at The House of Happy Walls got old and lost its attractiveness,” Benziger said. “It needed a radical makeover.” Tjiska Van Wyck, executive director at the nonprofit Park Partners, has monitored the makeover of the old museum that has attracted, over the last six decades, tens of thousands of visitors, who have come from as far away as Moscow and as close as Boyes Hot Springs. The exhibits, which rarely if ever changed, taught curious visitors the basics about Jack and Charmian London, who called one another “Mate,” and who created “Beauty Ranch,” their farm and estate that became a State Park after her death in 1955.

This year everything inside the museum, including Charmian’s Steinway piano, had to be removed to make way for the makeover. Then the new exhibits had to be fabricated and installed. Some old items, like the shrunken heads—a souvenir of a South Seas adventure—won’t be returning to the museum. “You can’t please everyone,” Van Wyck said.

During the long makeover she grew to love the building itself—which she calls “The Box”—as a work of art in which form and function merge. After months of careful planning and exacting labor that cost $800,000, the museum will reopen this fall. The Sibbett Group, an enhanced architectural firm with an international reputation, carried the project through from start to finish.

What will be eye-popping to visitors is that the second floor is now given over to the life and the work of Mrs. Jack London (nee Charmian Kittredge) who was a writer, a globetrotter, her husband’s muse, first reader, best critic and sometimes co-author, though she didn’t receive credit when novels like “The Valley of the Moon,” which she inspired, appeared in print.

“Charmian is every bit as interesting as Jack,” Benziger observed.

After Jack’s  death, in 1916 at the age of 40, Charmian rarely stopped traveling, writing and making new friends. She also designed the house, with its massive stonewalls, that was constructed from 1919 to 1926 and that provided her with a home for 29 years.

Visitors to the new, improved House of Happy Walls, which is now organized thematically, not chronologically like the old museum, shouldn’t expect to see the gloomy side of Jack and Charmian, or hear gossip about them.

“Live like a London, embrace life with passion and enthusiasm.” That’s the takeaway, Van Wyck explained in her office in the basement of the museum. Benziger added, “I hope the example of Jack and Charmian persuades kids to get away from their screens and experience the real world.”

In her kiss-and-tell biography of her husband, Charmian wrote, “We ordinarily occupied beds as far apart as possible.” She added, “Jack was doomed to remain unsatisfied, and unsatisfied he remained.”

It was Charmian’s idea to turn her home into a museum and open it to the public. In her will, dated April 28, 1938, she wrote that, “In case of my death, it is my wish that House With Happy Walls, is not to be lived in by anyone but a caretaker.” She added that the building, which she saw as an expression of her own personality, was meant to be “a museum to Jack London and myself.” She also wanted it to be “used for purposes of revenue.”

In the 1960s, an employee at the California State Parks system dropped Charmian’s word “with” and replaced it with the word “of.” So, the “House With Happy Walls” became the “House of Happy Walls.” 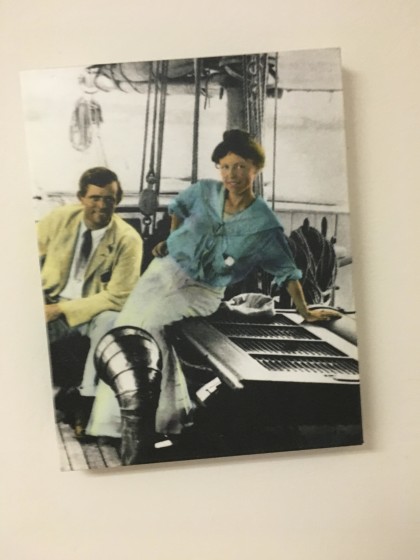 In the nick of time for the reopening of the museum, there’s a new collection of Jack’s non-fiction that will be on sale in the snazzy new bookstore. The editor of the collection, Dan Wichlan, is a scholar who writes and publishes for the love of it, though for much of his life he was a business executive at the Bank of American and Charles Schwab & Co.

In “Jack London: The Unpublished and Uncollected Articles and Essays,” Wichlan aims to prove that the author was no “racist” and no  “revolutionary,” as a handful of scholars have portrayed him. Some readers will want to argue with Wichlan. Still, it’s good to have the 41 individual pieces that he gathered in a single volume. “In the Days of my Youth,” an essay which is definitely worth reading, London wrote, at the age of 29, “I am out on a hunt for the boyhood I never had.”

The park recently acquired a letter that Jack wrote on June 20, 1910 in which he described his futuristic novel, “The Scarlet Plague,” as “a pseudo-scientific story dealing with the things that happened in the 21st century when a new micro-organic enemy smote mankind and left only several survivors.”

London ended that letter, “Have just had a visit From the Stork —a girl.” Born June 19 she died June 21. Three years later, Jack and Charmian’s dream house, which they dubbed “Wolf House,” burned to the ground. It’s no wonder Charmian wanted to call her home “The House With Happy Walls.”

Van Wyck emphasizes the happiness, not the sadness in Charmian’s life, though several recently discovered post cards, which now belong to the Park, reflect Mrs. London’s gloom. In October 1939, she told a pen pal that she “was suffering from a sort of general breakdown, nerves and what not.”

Still, she survived nervous breakdowns and gave the world a place where she and Jack— or at least their souls—are mated for as long as the walls at the House of Happy Walls don’t fall down.


Jonah Raskin is the editor of “The Radical Jack London: Writings on War and Revolution.”