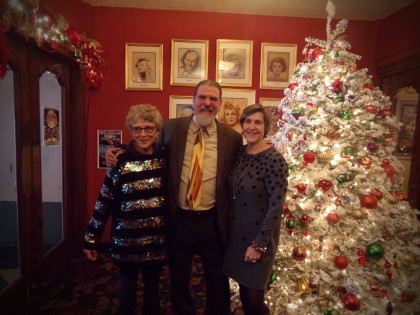 The Sebastiani Theatre is getting a reboot. Welcoming the transformation from private business to nonprofit ownership are Diana Rhoten, Roger Rhoten and Jocelyn Vick, president of the Sebastiani Theatre Foundation, which has assumed the new long-term lease and funding for the community treasure.

Roger will continue as its executive director, as the foundation board tackles major challenges. Structurally, the 84-year-old building must be brought up to ADA standards. And to stay competitive as a movie and event venue, plans includes a second, smaller screening room, a multi-purpose room, new seats, expanded food and wine service and more.

With a 25-year lease (and 25 year option), the team now has the security to pursue major structural improvements. “All of these changes will contribute to keeping the theatre open, alive, and economically vital,” Vick said. “(The renovation will both protect and preserve the historic features of the theatre while providing a modern, up-to-date facility for the use of the entire community.”

For Roger, the plans will “restore the space back to its glory days,” while Diana, known for her work with youth, is “thrilled to be able to increase the variety of children’s programs.” A capital campaign is imminent, and Vick said some early seed money is already in place. “Now we’re examining, with the advice and counsel of some key leaders in the Sonoma Valley, the best path toward making the theatre a center of film and performing arts for the greater Sonoma area.