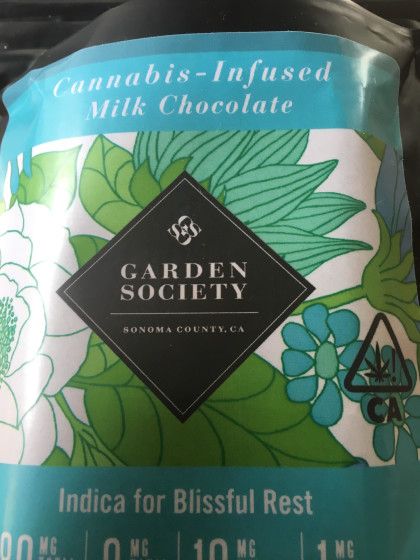 Erin Gore and Karli Warner love cannabis. They also love chocolate, especially their own. Not surprisingly, the founders of Garden Society enjoy cannabis-infused chocolates all year round, and with real gusto on and around February 14, the day that has been linked to chocolates and to lovers ever since 1861 when Richard Cadbury manufactured heart-shaped boxes decorated with Cupids. The Victorians went wild for the boxes and for the chocolates inside. Over the past century and a half, chocolate lovers have intensified the craze.

“I love sweets,” Gore says. “And I’ve given myself permission to indulge.”

This year, just in time for Valentine’s Day, Gore and Warner have a new product: a spicy dark chocolate that they’ll launch at Solful on February 9 and 10. In fact, both women will be at the Sebastopol dispensary to hand out chocolate-covered strawberries to everyone who shows up.

Making cannabis-infused artisan chocolates is no easy feat. Indeed, it takes a farm to grow and harvest the cannabis and a well-equipped kitchen where a chocolatier combines the cannabis and the chocolate to create the confections.

Garden Society grows biodynamic cannabis —the strain is called “Head Band”— in a remote corner of Mendocino County, where permits are easier to come by than in Sonoma County, which has been awfully stingy over the last 18 months. For their supplies of chocolate, Gore and Warner turn to Guittard, the Burlingame firm founded by a Frenchman named Etienne Guittard 151 years ago.

These days, chocolate lovers can’t be too careful about the source of the chocolate they eat. A 2016 study published in Fortune magazine noted that 2.1 million children in West Africa, where most of the world’s cocoa trees grow, “do the dangerous and physically taxing work.”

Indeed, the history of chocolate, like the history of cannabis, has been bittersweet and often hidden behind smoke and mirrors. Guittard chocolate is “fair trade.” That term means that laborers are paid living wages, children are not routinely exploited and that environmental sustainability is a goal. It’s still an uphill battle to enforce the rules.

To help make their artisan chocolates, Gore and Warner recruited two stellar chefs and chocolate makers, Jeff and Susan Mall, who once owned and operated Zin Restaurant and Wine Bar in Healdsburg.

“We were happy to help Garden Society,” Jeff Mall says. “They wanted a soft chocolate with real flavor. We took their recipe, tweaked it and helped them come up with a product that met their standards.” Gore added that “the Malls’ chocolate knowledge and our cannabis knowledge married well.”

Mall doesn’t know who first had the idea to combine cannabis and chocolate. No one seems to have that information. But the mix of cannabis and “weets” is at least as old as Alice B. Toklas’ bestselling 1954 cookbook that offers a recipe for “hashish fudge” that hippies once borrowed and tweaked. Toklas claimed that her dessert created an “artificial” paradise and that “anyone could whip it up on a rainy day.”

Garden Society doesn’t wait for a rainy day, and the chocolates aren’t just whipped up. It takes time, attention to details and respect for the process. (Recipes can be found online, and easy to follow.)

Unlike Toklas, Warner and Gore don’t guarantee “paradise” to those who eat their cannabis products, though Garden Society cannabis is a lot more potent than the cannabis that Ms. Toklas used. Cannabis, she explained, grew in “city window boxes” and in the wilds all across America. “It should be picked and dried as soon as it has gone to seed and while the plant is still green,” Toklas wrote. Unlike Toklas, Gore and Warner don’t allow their female cannabis plants to be pollinated and to produce seeds. After their crop is harvested, it’s cured and aged. The date of the harvest is on each box of chocolate, along with the THC and CBD content.

Toklas could learn volumes from Gore and Warner. She also might change her recipe for hashish fudge. Oddly enough, it doesn’t call for chocolate, but rather for finely chopped dates, figs, almonds, and peanuts, plus black peppercorns, nutmeg, coriander, cinnamon, sugar and butter. Indeed, her confection was more of an “energy bar” than a hashish brownie.

Toklas claimed that those who devoured her rich dessert would experience “ecstatic reveries and extensions of one’s personality on several simultaneous planes.” Gore and Warner make no such claims, though they say that their cannabis-infused chocolate provides a sense of wellness.

“It’s an indulgence that also brings joy,” Gore says. She reminds those who eat Garden Society cannabis-infused chocolates that it may take three or four hours to kick in. Warner adds that, “While you’re waiting, you could smoke one of our pre-rolled cannabis cigarettes. It will get you high until the edible takes over.”

Jonah Raskin is the author of “Marijuanaland: Dispatches from an American War” and an occasional contributor to the Sonoma Sun

One thought on “Cannabis-infused chocolates, for lovers”