A thriving ‘Operation’ in the Springs

Operation Bicycle began about seven years ago when bicycle lover Adrian Palenchar made his community bike shop idea a reality. He and fellow volunteer Chuck Palenchar then converted the basement of the Teen Services Center into a bicycle repair nerve center.

Two years later, Teen Services raised enough money to employ Adrian and two teens, while the shop expanded its hours and reach. It was in the cramped basement of the Teen Services headquarters, but it was a start.

Now the operation has kicked into gear with a spacious new location in the Springs, down the street at Vailetti Plaza, along Highway 12 just south of the Fetters Apartments. The move was celebrated with a February 10 ribbon-cutting party. 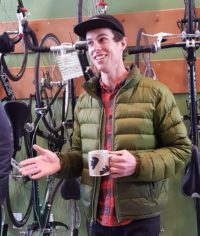 “This has always been my dream, but no dream comes true without a lot of help from a lot of people,” a grinning Palenchar told the crowd. “Operation Bicycle works because the whole community is behind it.”

Along with new parts, the shop rehabs and sells used bikes. Customers get good deals, and teens get great work experience working on bikes and learning from Palenchar, some earning a Bike Mechanics Certificate.

“The best thing for people to take advantage of is that anyone of any age can use our drop-in work stations to repair his or her own bike, and we can help them out,” he said.

Operation Bicycle takes donations from parts to whole bikes. All of it helps.

“The main motive is to teach bicycle mechanics to teens who have the same passion as Adrian” says Executive Director of Teen Services, Becky Jo Peterson. “That’s what we strive to do. Employing teens, empowering dreams.”

The community spirit was in evidence at the grand opening party. The majority of well-wishers were folks were those who have known Adrian and Operation Bicycle (OB) over the years. Supporters Jean Hopeman and Art Fichtenberg recalled when OB was just an idea of how to use the old basement below the Teen Center; they found it heartwarming to see how that vision has turned into such a thriving social enterprise. 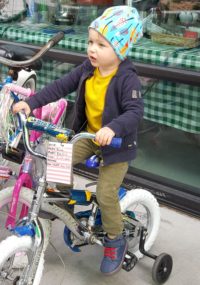 Also attending were Adrian’s kindergarten teacher, Tom Sours, who volunteers at OB, parents of teens who have learned about bike mechanics, customers who have experienced the great service (and prices) that OB offers, alums from Teen Services programs, and a youngster who went home with a brand-new bike for his upcoming third birthday.tter’s Apartments” =  “Fetters Apartments”

2 thoughts on “A thriving ‘Operation’ in the Springs”