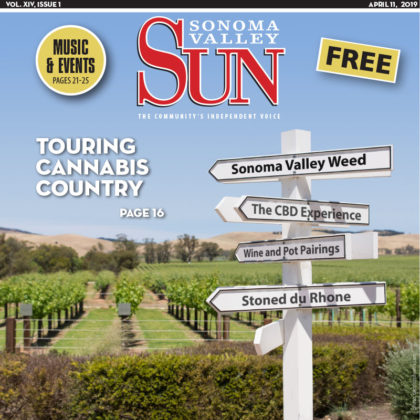 On a day trip into the Mayacamas, three perky women – Rachel, Lynn, and Christine – were very happy campers, indeed. Van Solkov was happy that they were happy. The founder and proprietor of Happy Travelers Tours – which is based in Sonoma – Solkov specializes in “adventures” in the world of cannabis, now gathering momentum on large tracts of land zoned for agriculture far above the Valley floor.

For decades, illegal cannabis grow-sites have been common in the rugged terrain of the Mayacamas. Local citizens have ripped up irrigation lines and collected trash that “guerrilla growers” have left behind. That’s now largely a thing of the past with a new wave of environmentally friendly growers. 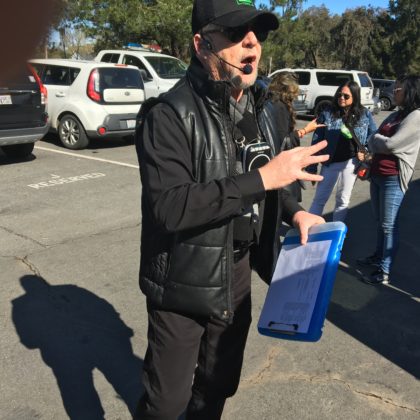 On a recent sunny Saturday, Van Solkov, who lives on West Spain Street, led a group of 15 curious travelers on a tour of a Mayacamas cannabis farm. Solkov called it “the 2019 Season Preview Tour.” The real season will begin on April 20, the semi-official national marijuana day when aficionados of pot gather, get stoned, and flaunt their freedom.

“The purpose of Happy Travelers Tours is to de-stigmatize cannabis and educate the public about its many medicinal benefits,” Solkov explained. There was no cannabis in the ground. It was too early to plant. Nor was there cannabis to smoke on the preview tour, though there was champagne and a picnic lunch – hardy sandwiches and tasty cookies from Sweet Pea Bakery.

There were also free samples of three different cannabis products made by Queen Gaia, the company owned and operated by the three women, all of whom live and work in the Bay Area. The first Queen Gaia product was a “honey stick,” the second a “palm cream,” and the third a “Sour Gummy Strip.” They all contain CBD, one of the non-psychoactive ingredients in the cannabis plant that some doctors recommend for anxiety and insomnia and to counter inflammation. 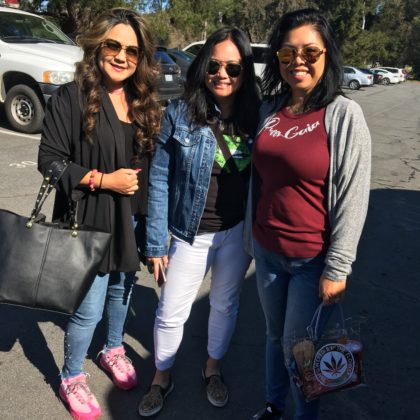 Rachel, Lynn, and Christine sang the praises of CBD as medicine. So did Solkov and Andrew Douglas Gardner, who goes by the name Doug, and who uses cannabis to help with his seizures. “For the longest time, I didn’t get Joni Mitchell’s lyrics, “You don’t know what you’ve got till it’s gone,” he said. He did finally get the lyrics to “Big Yellow Taxi” when seizures upended his life. CBD has helped him get his life back on track.

Doug’s father, Fred, is a long-time cannabis advocate who has helped spread the word about CBD. He also edits O’Shaughnessy’s, a journal packed with scientific information about cannabis, medicine, and human health.

Solkov said that he used CBD for pain and that he also smoked a lot of weed: “three grams a week.”

On his mission to de-stigmatize cannabis – which has been stigmatized for decades as “demon weed” and “the Devil’s own herb” – Solkov had help, on the inaugural tour, from Doug Gardner, and from Doug’s mother, who bought the Mayacamas property decades ago, and managed to hold on to it, though she didn’t have an inheritance or a job with a huge salary.

Two young farmers, Jes and Bobby, explained that they would cultivate and harvest the 2019 cannabis crop at the farm they called, “Gardener’s Dream.” When the county permits come through, they plan to grow 1,216 plants, which Doug Gardner estimated would be about 5% of the total amount of legal cannabis on the market in Sonoma County in any one year. 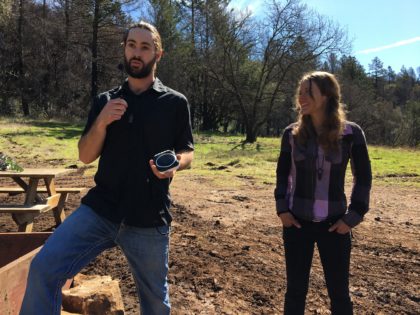 Bobby explained that he had grown as many as 2,000 plants in one season and that he had experience as a pot farmer in Colorado and California. Jes told the happy travelers that water would be used sparingly, and that there would be no “nitrogen run-off” to contaminate the soil or the streams that cut through the property. She and Bobby seemed like Eve and Adam in a cannabis Garden of Eden.

Solkov noted that on the real tours, travelers would be able to touch and smoke “a bit of cannabis.” He added, “You can’t believe how many people just want to touch it.” Travelers would also have the opportunity to trim the female flowers of the plant and learn how to roll a joint. “It’s harder than it looks,” he said.

The travelers on the preview tour met at 10 a.m. in the parking lot behind the Sonoma Barracks. They boarded a snazzy Mercedes van that was driven by Fonzi from Elite Excursions and who navigated the traffic on Highway 12 and took the twists and turns on Trinity Road. The travelers were back on the plaza by 2 p.m.

“I don’t smoke weed and drive,” Fonzi said. “It’s not legal to do that. I don’t want to lose my license.”

One of Doug Gardner’s neighbors, a smiling grape grower named John Derr, explained that he and his wife, Ashley, grew Grenache and Cabernet grapes and sold most of them to winemakers. They seemed to like the idea of a cannabis farm next door.

On the drive back to the plaza, Sonoma County real estate agent Terriann McGowan said that she used CBD products for her health and that she looked forward to the day when legal, permitted cannabis would be part of the agricultural picture in Sonoma.

Solkov made one last sales pitch. “I have tours lined up for summer, but I still need more guests to sign up,” he said. “I can do as few as four people or as many as 40. I hope you’ll spread the word.”