Under the Sun: Jesús Paez, undocumented in Sonoma 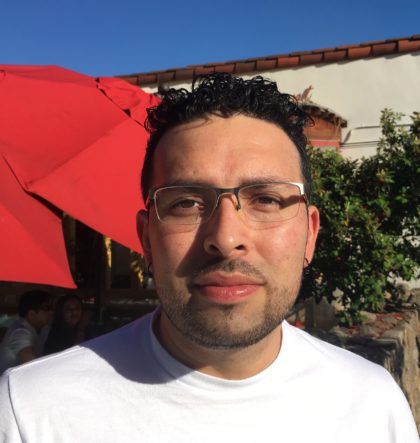 Where were you born? In Guadalajara, Mexico in 1989. My parents brought my four older sisters and me to the U.S. when I was around three.

Did they come straight to Sonoma? No, first we moved to Washington state, way up near the border. We only stayed there a couple of years, until they realized that work was not going to be a sure thing. And it was so cold. So we moved to Sonoma, where one of my aunts was already living.  My memories begin in Sonoma.

You first went to school here?  Yes. I did kindergarten at Flowery. That was before they had the dual immersion program. I went to El Verano first through fifth, then Altimira, and I graduated from Sonoma Valley High School.

So this is your home? I have no memory of Mexico. When I was 27, I went to visit my aunt, who was ill, in Mexico. It was the first time I had been there since I was a toddler. I speak Spanish but it is not perfect. There was a little bit of a language barrier. And I didn’t know Mexico.

How did being undocumented affect you? Well, for instance I took driver’s ed at the high school, but I knew I would not be able to apply for my driver’s license. And I would feel nervous just walking down the street, or going to a store, knowing I was vulnerable if there might be a raid by immigration officers.

When did you apply for DACA (Deferred Action for Childhood Arrivals)? In 2012, the year President Obama first announced it. A friend of mine in Santa Rosa, called me up to invite me to join a nonprofit for dreamers. There was a workshop, with lawyers there, to help over 300 people apply.

Did you talk with your parents about the risk involved in giving the family information to the government? Yes, and they were skeptical. But they left the decision up to me.

Did your sisters apply too? My youngest sister, who is five years older than me, applied in 2013. The others did not meet the age requirements to qualify.

What are the benefits of DACA? Well, let’s be clear, it is not a fix, it is just a Band-aid. It is not a path to anything. What it does is allows you to get a Social Security number to make it easier to get work; and you can get a regular driver’s license, “real I.D.” You used to be able to visit a relative who was ill in the country where you were born, and return legally to the U.S., but since 2017 that is not the case. And since 2017 they don’t accept new DACA applicants. DACA is only valid for two years, then you have to apply to the government to renew it. I’ve renewed three times. For me, it has given me comfort knowing that I have some form of protection, even though it’s not the best, it’s limited.

Any other benefit? I came to realize that once you take on being undocumented, it takes away the fear. Acknowledging that I am undocumented gives me power.

Do you consider yourself a “dreamer”? I don’t like the label because it divides the undocumented community into two parts, the ones who are headed to university and the ones who are working.

Was Jose Antonio Vargas, the undocumented Pulitzer-prize winning journalist, an inspiration? We definitely learned a lot from him. He is in the upfront of the immigration movement, one of the first to come out publicly as undocumented. He gave courage to others to do the same.

Tell me about the nonprofit that helped you apply for DACA? North Bay Immigrant Youth Union, in Santa Rosa. I worked with them for four or five years, and then stepped down for new people, the ones we were training, to step into leadership roles. There’s still a lot of work to do – like rights workshops. Lots of people don’t know that we – the undocumented – have rights. The right to remain silent, the right to have a lawyer, the right to refuse entry into your home without a warrant.

How do the undocumented learn about their rights? There are lots of resources, lots of organizations that help, in Sacramento, San Francisco, the Central Valley, southern California. They are affiliated in one big statewide organization, California Immigrant Youth Justice Alliance. MALDEF, the nationwide group founded in 1968, Mexican-American Legal Defense and Educational  Fund, is their fiscal sponsor.

What are your personal dreams?  I went to Santa Rosa Junior College for general ed after high school. I plan to return in 2020 to get the radiation tech certification – Radiologic Technician. Right now I work two jobs – I’m in charge of pricing at a local market, and I do re-stocking at a hardware store. I work about 65-70 hours a week, to save up for going to school.

A law that makes citizenship possible for us, the undocumented who are living, studying and working here.

One thought on “Under the Sun: Jesús Paez, undocumented in Sonoma”