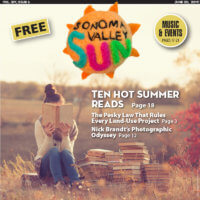 With summer comes a longing for curling up in a hammock or stretching out at the beach with a good book. A real book, the kind where you can dog-ear your place when you start to doze. Jude Sales of Readers’ Books put together some suggestions for The Sun.

The story follows two young people in Ireland from high school through their college years. Sales says the characters are so beautifully drawn that you will be compelled to read on “even though you don’t like the way their lives are going.”

This novel by a Canadian author is “highly recommended” by everyone at Readers’ Books. It’s based on the true story of eight Mennonite women living in a community in South America who discover they are being drugged and assaulted. They spend a day and a night together talking about what to do. The narrator is an outcast male, formerly shunned, who acts as their recorder.

The Flight Portfolio by Julie Orringer

More historical fiction, this is the thrilling story of an ordinary British bureaucrat sent to Marseille during the Vichy regime. His assignment is to persuade writers and artists to leave France before it’s too late, and to facilitate their departure. The artists include Marc Chagall, Hannah Arendt, Max Ernst, and Marcel Duchamp. A highlight is a hilarious party given by the Dadaists.

The Overstory  by Richard Powers

At last out in paperback, this Pulitzer Prize-winning novel tells the stories of trees and the people who care about them. Each chapter follows an individual, and in the second half we see how these people connect.

There, There by Tommy Orange

Also in paperback, this debut bestselling novel is by an urban Native American. Orange, who is Cheyenne and Arapaho, was born and raised in Oakland. He writes about his people, telling 12 stories of characters whose lives converge when they attend a powwow in Oakland.

“One of Ondaatje’s best,” says Sales, about this tale of teenage siblings in London, inexplicably left in the care of a relative near the end of  World War II. Full of vignettes narrated by the brother, the crazy adventures morph into an understanding of where their parents have gone and why.

Save Me the Plums by Ruth Reichl

Billed as a “gourmet memoir,” this autobiography is by the famed New York Times food critic. While writing the Gourmet cookbook, she learns that the magazine is about to shut down, and decides to become its editor for its final months.

“Everything about this book is crazy and fun,” declared Sales. A short read, this is the true story of a young English girl, just out of high school, who decides to ride in a horse race all across Mongolia.

A memoir written for her daughter. A beautiful story, compellingly told by O”Farrell, who writes about 17 brushes with death.  “A little dream of a book.”

A poignant book focusing on family by the eminent humor writer. “It’s just Sedaris; what else can you say?” asks Sales.