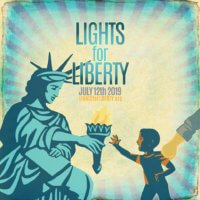 Across the country Friday, July 12, the Lights for Liberty: A Rally Vigil to End Human Detention Camps will protest the inhumane conditions faced by refugees.

The local action will be held at Sonoma Plaza at 6 p.m.

La Luz is promoting the protest, which “will bring thousands of Americans to detention camps across the country, into the streets and into their own front yards, to protest the inhumane conditions faced by refugees.”

The statement continues: “Across this country, we have witnessed acts against people fleeing persecution many of us thought we would never see in modern times. At Trump’s human detention camps, teen mothers and babies are held outdoors in ‘dog pounds.’

“We have witnessed the sick and elderly confined to “icebox” rooms for weeks at a time. Unbelievably, children as young as four months are taken from their parents, medicine is confiscated, and medical care withheld, and LGBTQ and disabled individuals are held in solitary confinement.

“Perhaps most terrifying, refugees are beginning to be moved onto military grounds, where there will be a lack of oversight from the media, lawyers, and human rights monitors. Many of us thought we would never see anything like this in modern times.

“Now is the time for every person to stand up and say, ‘We will not accept this.'”

One thought on “Local protest to end detention camps”