The Sonoma League for Historic Preservation celebrated 50 years with a gala that included presenting three members with its highest award for preservation. Carla de Petris, Johanna Patri, and Roger and Diana Rhoten were honored with the Margaret Eliassen Award, as well as a Certificate of Special Congressional Recognition, presented in person by Rep. Mike Thompson.

Noted for their contributions to preservation in Sonoma Valley were:

Carla Nicole De Petris, who was inspired by League Founder Margaret Eliassen to become an active member. She loved being a hostess for the League at its Toscano Hotel open houses and served as co-chair of the original League Historic Resources Survey, which the League last year published online.

Johanna Patri was instrumental in getting the State Department of Parks and Recreation to open and repair, furnish and manage the Toscano Hotel Kitchen and Dining Hall. She further educated the public on the importance of historic façade easements as an effective preservation tool and she co-chaired the Sonoma Valley Historic Resource Survey, funded by a grant from the State Office of Historic Preservation. 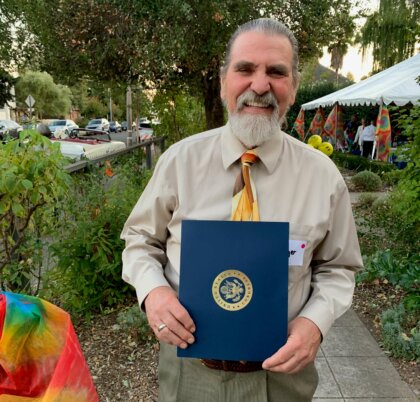 In 1988 Roger Rhoten founded the Friends of the Sebastiani Theatre and raised funds to keep it afloat. In 1992 the City of Sonoma chose Roger as manager/lessee. Roger’s dedication, selflessness, and vision — along with the many contributions both behind the scenes and before the footlights by Diana — are what have preserved this iconic and beloved building for Sonoma.

At the gathering, Rep. Thompson also presented a special Certificate to the Sonoma League for its 50 year history of support of historic preservation in the Sonoma Valley.

The League had another award just days prior to the Gala in that Supervisor Susan Gorin awarded $2,000 in community grant funds to the League for its long-term support of historic preservation in Sonoma Valley.

League President President, Alice Duffee, speaking on behalf of the board and membership, said she “thanks everyone for their ongoing support of historic preservation activities in the Valley, and we look forward to more decades to come.”