By Michael Acker | Everybody knows the Barking Dog, right? At the southwest corner of Highway 12 and Vallejo Avenue in Boyes Hot Springs, it seems like it’s been there forever. Next door, the shop Lonesome Cowboy is also of long standing. Ah, but there is history there. 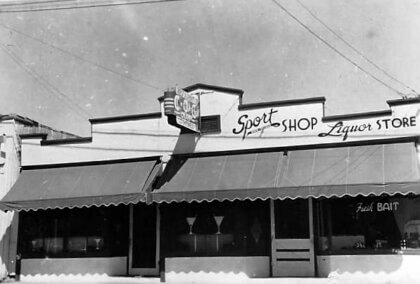 “The Dog” moved from the building that now houses El Molino, but in 1938 it was Keller’s Club Hollywood, a watering hole featuring root beer and probably stronger stuff. Around 1940, Oscar Larson became the new owner and it got a new name: the COG Club. That year they ran a newspaper ad for a dance, featuring “Chuck and Mack, Cowboy entertainers.”  The business also had an adjoining combination sport shop and liquor store, which, I’m sure, was a great convenience for hunters. Larson would go on to local prominence, and have a park named after him.

Denny Coleman took over the business in 1949. “The popular Glen Ellen man, who formerly was connected with the Rustic Inn, has leased the establishment form O.M. Larson,” (all quotes from the Index Tribune). In 1959 the COG celebrated “…a gala 11th” anniversary party…proprietor Denny Coleman will also celebrate his birthday, ‘but not my eleventh,’ Denny said.” 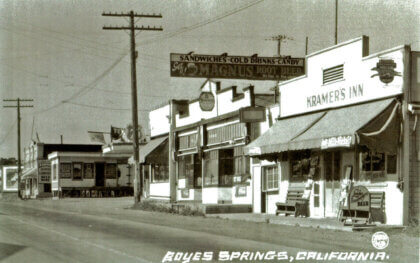 The building next door was Noble Kramer’s store when it burned in the 1923 fire. Kramer rebuilt the next year. He ran Kramer’s, which became a Greyhound bus stop, until he sold it in 1938 to A. Desposito, a “well known Sonoma man,” according to the reports of the day. In more recent times, business tenants have included Mas Por Menos, an all-purpose business catering to Spanish speakers, and a tattoo parlor. It became the Lonesome Cowboy in 2012.

There is a third building in the old photos, to the north. That was a service station in what is now the Barking Dog parking lot. At one time, Sam Agnew, a well-known Major League ball player from before World War I, owned the station. Agnew is known for catching Babe Ruth’s two World Series victories. He later became a coach in the Pacific Coast League, which brought him to Boyes Hot Springs for San Francisco Seals Spring training. He died in Sonoma in 1950.