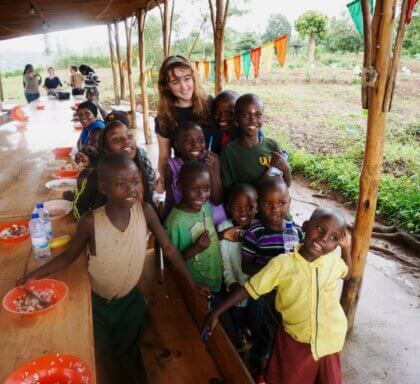 Sonoma Valley High sophomore Sandra Hagstrom recently returned from an eye-opening two-week trip to the African nation of Rwanda, where she was part of a group representing Gardens for Health, a nonprofit that promotes nutrition and gardening in Rwanda and surrounding countries. The trip was in celebration of the nonprofit’s 10th Anniversary.

Many who shop at Sonoma’s Bon Marche Thrift Store on Riverside Drive know that a portion of all proceeds from their sales go to Gardens for Health. Owner Anna Bimenyimana, who is from Rwanda, started the store 12 years ago when she and her family moved to Sonoma. Sandra has worked there for almost two years and that is in part how she ended up participating in this trip.

In all there were twelve people on the trip, all from Sonoma, including representatives from End World Hunger, founded by Sonoma resident Todd Evans. Bimenyimana reported proudly that “In just one month, we raised $3,000 and End World Hunger raised another $3,000, all of which was contributed towards the garden programs.”

Sandra was left deeply touched by the trip, during which they toured the whole country. “I was always eager to travel,” she said, “And I was interested in going to countries other than European countries.” Not surprisingly, Sandra had the high school’s blessings for this highly educational journey.

Her favorite parts of the trip? Visiting families who had created their own gardens with the help of Gardens for Life. In their small yards or plots, they were provided with vegetable seeds that would otherwise have been beyond their budget, as well as gardening tips and instruction, and lessons on cooking the food from their gardens, including simple one-pot meals.

Another favorite part of Sandra’s trip was “meeting people who showed so much love for each other, and for us – they had so much gratitude.”

Most Rwandans have traditionally been subsisting on potatoes and beans, which are inexpensive but not nutrient dense. Malnutrition has been a major issue in the country. Fortunately, there are two rainy seasons a year in Rwanda and the soil is very rich. Gardens for Health teaches farming methods to keep the soil and plants healthy. Sandra said they emphasize eating “all the colors” for optimal nutrition.

Bimenyimana said that without the help of Gardens for Health, “Any produce they did grow, they would prioritize selling in order to get by.”

One of the hardest parts of Sandra’s trip was getting there – many hours of travel from SFO to Montreal to Brussels and finally to Kigali, the capital of Rwanda. And then again on the return trip. “But it was so worth it,” she said.

Visiting the Rwandan Genocide Museum was painful and moving for Sandra, but she said people seem to be moving on and are busy rebuilding their country. Bimenyimana said there have been reconciliation activities in which perpetrators of crimes during the genocide 25 years ago ask forgiveness from families of their victims.

One thought on “School Notes: One teen’s life-changing trip to Africa”