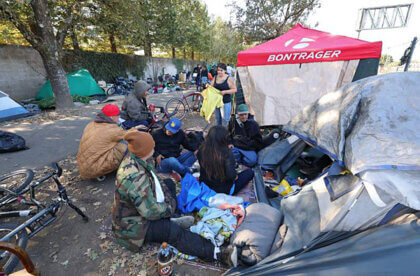 The essence of capitalism is the accumulation of profits and assets. This accumulation is enabled by the exploitation of labor, which is to say the skimming off of the excess value of productivity, the value above that required to sustain workers. That accumulation, in turn, provides the capital necessary to acquire assets of value, either hard assets in the form of real estate or gold, for example, or soft assets in the form of financial securities such as stocks and bonds.

In theory, workers in a capitalist system have the opportunity to accumulate profits and assets as well, although doing so requires time, talent, and sufficient money. Our credit-based economic system offers those deemed credit-worthy the chance to borrow capital, but only a very few succeed in business; most start-up business ventures fail.

Economically, the vast majority of people who work for others live lives ranging from subsistence to comfortable sufficiency. Those subsisting live paycheck to paycheck, always on the edge of a financial precipice. The unemployed struggle to survive, often within the confines of deep poverty, frequently leading to homelessness. This is capitalism’s failure: capitalism lacks the ethical framework to support the profitless activity of caring for the needs of the poor.

The world-wide economic depression that began in 1929 followed the rise of communism in what became the Soviet Union; socio-political movements  also arose in Europe and the United States in response to poverty. In Germany, Adolph Hitler’s fascist Nazi Party imposed state control over all aspects of society, including the economy. In the United States, Franklin Roosevelt instituted various federal programs to employ workers, and created Social Security, which served to reduce the socio-economic pressures on the unemployed and reduce the appeal of communism. Die-hard capitalists objected to these profitless, government-run programs, and they continue to challenge them to this day. It is for this reason that Republican proposals to cut government budgets for Social Security, Medicare, food stamps, and other social safety-net programs remain in play.

Ardent capitalists believe that caring for the poor is not the job of government, given that the government primarily accumulates its own capital by collecting taxes. Poverty, they say, should be addressed by religious groups and non-profit charitable organizations, institutions that operate outside of the usual modes of profit-driven capitalism. Notably, taxes on capitalist enterprise –– business –– have been continuously dropping since Ronald Reagan was President.

There’s little in the way of profit in caring for the homeless; to the contrary, those physically, mentally, or economically unable to care for themselves require a constant infusion of capital. Caring as such is a non-capitalist enterprise that runs headlong into America’s long-simmering debate about the role of government, because such activity makes no profit. Government funds fire departments and maintains public roads at no profit, howeverbut all but the most extreme capitalists raise no objection to these enterprises because they save them the expense of protecting and paying for the infrastructure their workers need to commute to their jobs and protect their homes.

We believe that government must intercede to prevent free-market excesses, and that government is the logical funding source for a major non-capitalist program that ethically addresses homelessness and housing affordability, but government only gets a slim piece of capitalism’s cake, and as we see it, if it were solely up to fervent capitalists, they’d rather starve government than see it care for the poor.