The City of Sonoma maintains a number of cemeteries, including the historic Mountain Cemetery containing the tombs and graves of many of the area’s founding families and residents. Mountain Cemetery, in particular, requires continuous maintenance to clear brush, maintain tree health and safety, and prevent vandalism. Its park-like atmosphere and superb views from its upper reaches make the Mountain Cemetery a popular place for hikers and walkers to meander up the hillside.

The cost of operating and maintaining the cemeteries is not adequately covered by ongoing interment fees and, according to the city, the Mountain Cemetery long ago exhausted practical space for new ground burials. Though there are crypts available for cremains, they are the only remaining option in our oldest cemetery. That means the Valley Cemetery on MacArthur Street is the only available place for Sonoma families to put their loved ones in the ground and place a headstone.

Past studies by various consultants resulted in proposed solutions that the City Council found unacceptable. For example, one proposal called for the leasing of Mountain Cemetery to a private company, and their creation of a chapel and service structure at the top of the hill, served by a new driveway. This would have unduly disturbed the natural environment of the upper reaches of the hillside, and placed at the summit a structure visible from the valley floor. 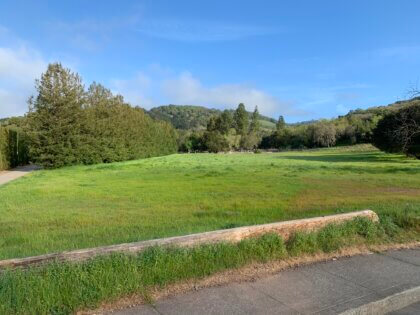 There might be some opportunities to change this situation, however. The first involves a vacant parcel to the east, adjacent to the Veterans Cemetery. This large parcel, presently owned by the County of Sonoma, would be a perfect place to create a “green” burial annex to the main cemetery.

Green burials are becoming a popular alternative to standard burials in concrete-lined vaults in the ground. Fernwood Cemetery, for example, is becoming an increasingly popular Bay Area green cemetery.

Cremation has become more popular (and less expensive) than in-ground burials. There are even services offered that turn bodies into compost. We suggest that the vacant parcel in question could produce additional revenue for the cemeteries and a land-swap explored with the County of Sonoma.

Development of the land could combine tree-planting with a place for scattering ashes at the base of a tree. As trees are planted, a bronze plaque could be placed marking the spot in  memory of a loved one. The cost of the tree, its planting and the plaques could all generate needed revenue. Ultimately, in a generation or two, Sonoma would have a new, forested memorial park, as an additional entry into Mountain Cemetery.

Another opportunity is to survey the existing Mountain Cemetery and to update its map to identify any remaining locations on the hillside that might be available. There may well be more locations than currently believed for both in-ground burial and mausoleum construction. And those locations higher on the hillside would, we suspect, be highly desired by many families.

— The Sun Editorial Board

One thought on “Green burials”